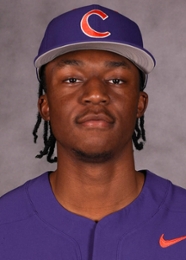 
Sophomore lefthander who saw action as both a starter and reliever in his first season at Clemson … has an unorthodox throwing motion … No. 34 ACC prospect for the 2021 draft in the preseason by D1Baseball.


Before Clemson: Second-team All-American by Perfect Game … all-state and all-region selection … lettered three times in baseball at McEachern High School, where he was coached by Karlton Schilling.