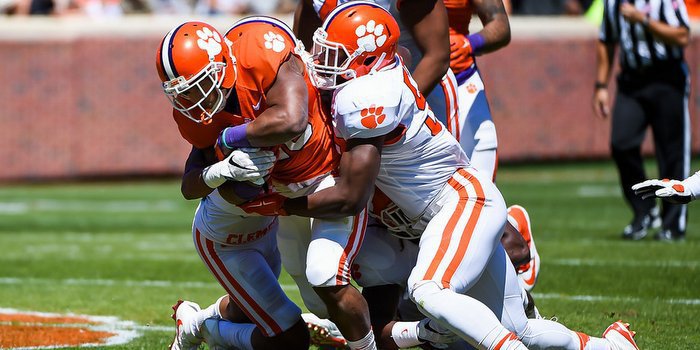 In this morning’s article about chasing championships and talking about the post-spring thoughts, we talked about the offense. The offense is going to be scary good, but the adage says that defense wins championships.

How good will Clemson’s defense be? I think they’ll be good enough to help Clemson get back to the College Football Playoff. It’s hard to lose 16 starters over a two-year span and not see some sort of drop-off. Over the last two years Brent Venables has sent players like Vic Beasley, Kevin Dodd, Shaq Lawson, Grady Jarrett, Jayron Kearse and Mackensie Alexander off to the NFL.

If you’re losing that much talent in a short amount of time, you’d better be recruiting well. The good news is that Venables has no problem recruiting and bringing in elite talent, and that’s what made this spring so exciting – young but talented players abound on this defense and it’s going to be fun watching them grow up. The good news is that after this season there shouldn’t be mass defections – Carlos Watkins, Ben Boulware, Jadar Johnson and Cordrea Tankersley are seniors and right now there isn’t a guy that you look at it and think he’s a candidate to turn pro after his junior season. Not yet.

Dan Brooks has a wealth of talent here. We all know Christian Wilkins and Carlos Watkins and Scott Pagano, but the Tigers added early enrollee and man-child Dexter Lawrence into the mix in January. Lawrence just looks unblockable, a rare combination of size and speed that you don’t see all the time. I’ve had former players – good players – who would leave the practice field after watching a spring session and they were all shaking their heads after watching Lawrence.

The only blemish on Lawrence’s spring happened after a highlight – he intercepted a pass during a scrimmage but let wide receiver Hunter Renfrow (who gives up about 160 pounds to Lawrence) tackle him short of the goal line. This kid is going to be fun to watch, but the good news is that his emergence and the emergence of a few others gives the Tigers depth in the middle.

Albert Huggins made strides over the spring and looks ready to contribute, while redshirt Gage Cervenka impressed me in the spring game. Add in Jabril Robinson and freshman Nyles Pinckney and this group is absolutely loaded. Which is why Wilkins might spend some time at ………….

Wilkins slimmed down in case he’s needed at defensive end. His size at end fits in well against running teams (think Georgia Tech) and those who like to run the read option. He also proved he can rush the quarterback. But think about this – what about a defensive line that features Austin Bryant and Wilkins at end and any combination of Lawrence and another tackle….will there be a bigger or more athletic group in the nation? That’s scary.

Bryant took a step forward this spring, but so did Richard Yeargin, Clelin Ferrell ad Chris Register. All three did some good things and will continue to progress in fall camp. Xavier Kelly will enroll over the summer, giving Marion Hobby has the talent to work with, they are just inexperienced.

We all know what Ben Boulware can do – he makes tackles and can get to the quarterback with abandon. We all also know he can be limited in downfield coverage. But the dude is a playmaker and will man the weakside linebacker spot. At the middle (or MIKE) spot it looks like Kendall Joseph exited the spring with that spot in hand, while Dorian O’Daniel seems to be a lock at the Nickel/SAM (or strongside) spot.

However, Venables has something this year that has been lacking – depth. If you watched the spring, you know that true freshman Tre Lamar (a MIKE) is going to be tough to keep off the field. He made ten tackles in the spring game, and he has the size (6-4, 240) and speed to be a dominant man in the middle. Redshirt freshman Chad Smith also drew rave reviews from Venables at the end of the spring, giving the Tigers three solid choices in the middle.

At Boulware’s WILL spot, Jalen Williams earned valuable snaps last season and should once again be a reliable option. However, Venables has another 5-star at that spot in Rahshaun Smith, who also showed off his athleticism and speed in the spring game. Smith is another one that will be hard to keep off the field in the fall, and might be an option in third-and-long situations if he learns the playbook.

That leaves the Nickel/SAM spot – O’Daniel has more snaps than any other linebacker except for Boulware heading into the season. He will be backed up by the Davis twins and maybe Korrin Wiggins. Wiggins is a bit of a wildcard – he suffered a torn ACL in camp last fall and didn’t participate in most spring drills. Venables refused to talk about Wiggins, saying he didn’t know where Wiggins would fit in until he got him on the field. Wiggins can play safety or the Nickel/SAM spot (his spot two years ago), and my guess is we’ll have to wait until the fall to see where he lands.

Clemson suffered – in the words of one coach – egregious losses in the secondary after the title game. Gone are safeties Jayron Kearse, T.J. Green and Jefferie Gibson and cornerback Mackensie Alexander. Anchoring the secondary is the always solid and sometimes spectacular Cordrea Tankersley, who has turned himself into an NFL corner. Teams threw his way last season and paid for it. This year, teams will likely throw to the other side of the field.

Marcus Edmond, Ryan Carter and Mark Fields all earned praise at one point or another in the spring, but the spring game showed there is still work to do. I would feel a lot better if Adrian Baker hadn’t suffered a torn ACL – he could be the lockdown corner Mike Reed needs – and we won’t know if he’ll return until October.

This could be a case where someone like 2016 commit Trayvon Mullen or K’von Wallace come in and earn playing time. There are bodies there, and there is talent, but can they all grow up in time to keep this unit from being the weak link of the defense?

At safety, Jadar Johnson is talented and will surprise everyone but those who know how good he can be. He’s simply been behind NFL talent for the past few seasons. Van Smith earned valuable experience last season and will likely hold down the other safety spot. Freshman Tanner Muse earned high marks at the end of the spring, but this is another spot where a freshman like Isaiah Simmons might come in and earn some snaps.

Unlike the offense, which has starters set all over the field, the defense will have battles that last well into fall camp and maybe even into the season opener at Auburn. There will be starting jobs up for grabs, and there will be backup jobs for the taking. There is talent all over the field, but they have to grow up in a hurry. We heard that last season, too, and it turned it out okay.

What Brent Venables has to hope for, however, is one difference from last season. Instead of playing well early and tailing off at the end, he is hoping they play their best football at the end of the season.