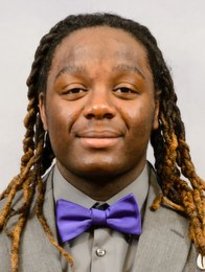 Linebacker
B I O
Versatile member of the linebacker corps and special teams units … entered 2018 with 57 tackles, 5.5 tackles for loss, three sacks, three quarterback pressures, an interception for 12 yards, five pass breakups and a caused fumble in 492 snaps over 37 games (one start) in his career.

2018: Recorded at least one tackle in each of the first four games, including a season-high six tackles at Georgia Tech … added three tackles at Wake Forest.

2016: Had 24 tackles and two pass breakups in 214 snaps over 10 games (one start) … appeared in 34 snaps at Auburn, with two tackles … recorded first career interception in win over Troy, while also posting six tackles … made first career start against SC State, with five tackles in 39 snaps … suffered sprained knee in only snap at Georgia Tech and missed the next three games … returned against Florida State, logging eight snaps … knocked down a pass in five snaps against Pittsburgh … had a tackle in 11 snaps against South Carolina … forced into action against Virginia Tech when Dorian O’Daniel was ejected for targeting on the seventh snap of the game … amassed seven tackles, including one for loss, with a pass breakup in 56 snaps.

2015: Had 15 tackles, 2.5 tackles for loss and two sacks in 85 snaps over 15 games … five of his tackles came on special teams … posted three tackles in 23 snaps against Appalachian State … notched first career sack at Miami and played 20 snaps against the Hurricanes … posted a special teams tackle at NC State … played over 30 snaps in win over Wake Forest, contributing six tackles, including 1.5 for loss … enrolled in January.

Before Clemson: Originally signed with Clemson in 2014 … No. 29 player in South Carolina by ESPN … No. 34 player in South Carolina by 247Sports.com … MVP of the victorious North team in the North-South All-Star game; he had six tackles … had 186 tackles, 18 tackles for loss, one interception, six caused fumbles and six recovered fumbles in his career … coached by Dan Morgan … recruited by Brent Venables.