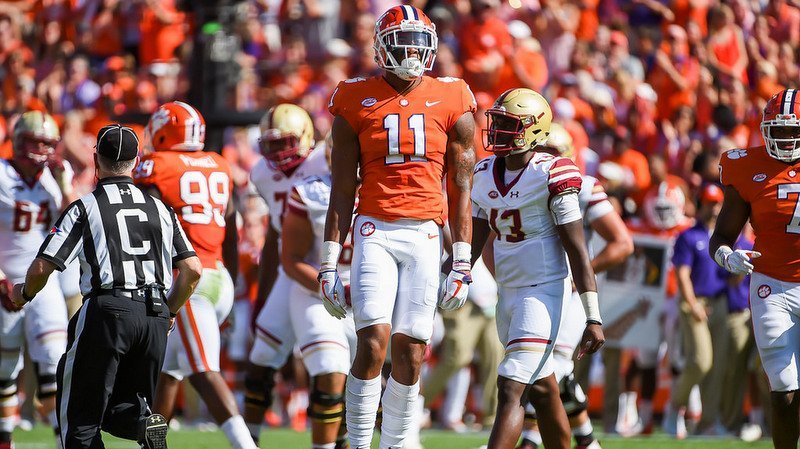 CLEMSON – Isaiah Simmons spent part of the offseason wondering how he could help the defense in 2018, and he and his buddies came up with the idea of switching from safety to strongside linebacker. Simmons fell in love with the idea and decided to track down defensive coordinator with the suggestion but found out Venables beat him to the punch.

Venables told Simmons that a move to the SAM might be the best thing for Simmons’ career, and the switch was made.

Simmons is battling with veteran Jalen Williams to replace Dorian O’Daniel. O’Daniel was a finalist for the Butkus Award, given to the nation's top linebacker, O'Daniel was the only Clemson defender to make at least 100 tackles last season and he led the defense in snaps played with 718 in 2017.

"Sitting there talking with a few of my buddies on the team, I was just like, 'That might be the position for me,'" Simmons told TigerNet last week. "(I said) 'I guess we can figure it out and see in the spring.'"

Venables was ahead of the curve and made the suggestion before Simmons could bring it up.

“I’m glad me and him were on the same page without even knowing it,” Simmons said.

He has split time between safety and the SAM spot this spring.

"I feel like I'm moving along, progressing somewhat fast but of course me and my mentality, I always want to get better and better every day. I would love to be better than what I am right now, but you best believe I'm going to work to get there," Simmons said. "I would say I'm working on coach (Venables') trust, but I don't have it all the way yet. Just when I get that, then I'll have more leeway to be more comfortable."

Clemson head coach Dabo Swinney was asked what he had seen out of Simmons this spring.

“What I hoped I would see. Range, some diversification from him,” Swinney said. “We love him at the nickel-Sam position. And we love him on the back end. He’s got length and range and ball skills, and he’s really starting to figure things out. He hasn’t played a ton of snaps, but he’s got a bright future, and he’ll be a guy that will be a factor for us.”

Simmons said the versatility can only help his career.

"I feel like versatility, I feel like that boosts you completely. For instance, a guy who can play receiver who can also play corner, that’s going to boost his stock," Simmons said. "Minkah Fitzpatrick, he can play anywhere in the secondary. That’s probably why he’s going to be the first defensive back taken (in the draft)."