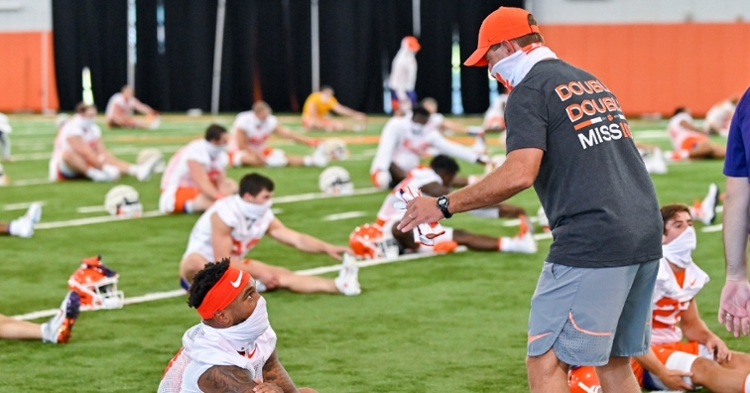 Masks Up: Swinney talks to a player during Thursday's practice (Courtesy Clemson Athletics).

CLEMSON – Football is back.

Practice was a little different according to head coach Dabo Swinney.

"We've never had football practice with the type of protocols we have in place, but once we got on the field it was awesome,” Swinney said.

Dabo Swinney said defensive end Xavier Thomas is being held for medical purposes right now. Thomas caught COVID-19 and then strep throat and came back to campus a little heavy, so they are holding him. Swinney said Thomas practiced Thursday in a yellow jersey, but they have to get him healthy. Swinney said Thomas lost “from March to now” and they would love to put him on the James Skalski plan – play him in four games and let him redshirt if he can. Thomas will graduate in December, but Swinney said this will be a blessing in the long run.

“We wouldn’t him to get out there and not be the best version of himself,” Swinney said. “We are going to try and help him maximize that.”

*Swinney said he was disappointed in not playing South Carolina this season. Then said that he and Will Muschamp don’t make those decisions and they will play the schedule they are given. “Disappointed. It's kind of crazy. We're going to go to Notre Dame and they're going to go to Texas or wherever and we can't go an hour to play a game. Those aren't decisions that Will (Muschamp) and I make.”

*Swinney said the Tigers have been “really fortunate” and most of the players who have had COVID-19 haven’t had any issues.

*He congratulated his strength staff on doing an “amazing job” of helping the players with everything. Then said that it comes back to “personal commitment, but the culture of our program is commitment. They are motivated.”

*Swinney said wide receiver Justyn Ross (neck surgery) was running up and down the field Thursday. Said strength coach Larry Greenlee, who was with Mike Williams every day during his recovery from a broken neck, has been with Ross. Swinney said the doctor in Pittsburgh who did the surgery did a fantastic job and Ross is way ahead of where they expected him to be. December is a big milestone. Swinney said they have to hold Ross back because he feels normal. He has been released to run and is doing light lifting and is doing well. Ross was in a yellow jersey Thursday and was running the sidelines and said, “it brings a smile to your face.”

*Both Frank Ladson and Joseph Ngata didn’t practice today because of protocols according to Swinney.

*Notre Dame being able to play for an ACC title is a “win for everybody. It is good for our league and that is just where we are. It will be an interesting season. There are new people on our schedule that we didn’t plan for, but that is the challenge this year.”

*Travis Etienne checked in at 199 pounds and Swinney said the senior running back “looked unbelievable today. He is in a good spot.” However, he mentioned that 199 is probably within five or six pounds of where Etienne will be during the season, so it sounds like he wants Etienne around 205.

*On Trevor Lawrence being a leader, Swinney said his quarterback has embraced every facet of it. He said Lawrence refuses to ask anything of anyone that he won’t do himself. Swinney said Lawrence goes above and beyond, has integrity and drive and preparation that makes all the great ones great.

*Swinney said Andrew Booth and Mario Goodrich are healthy and ready to roll. Said the Tigers are deep at corner.

*Freshman offensive lineman Walker Parks was disappointed he couldn’t be in full pads today. Swinney said Parks loves to compete and has every ounce of what it takes to be a great player. He said Parks has a really bright future, as does the rest of the young offensive linemen.

*He said that freshman running back Demarkcus Bowman “didn’t get slow between May and now.”