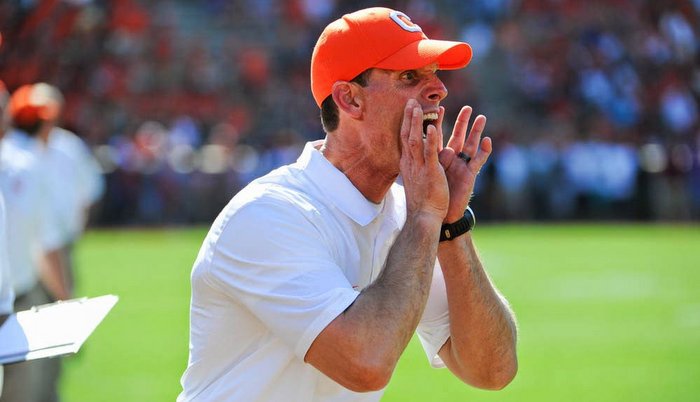 Brent Venables' defenses were gashed at times in the first half

CLEMSON – The White defeated the Orange 35-24 Saturday afternoon in Death Valley, and we have plenty of observations to pass along.

First off, it wasn’t the best day for the defense as both offenses moved the ball almost at will in the first half, a half that ended with the White leading the Orange 35-17. The defenses tightened it up in the second half.

*I wasn’t sure that there was anything Artavis Scott

Artavis Scott
So. Wide Receiver
#3 5-10, 190
Oldsmar, FL
View Full Profile could do to impress me after his performance last season, especially after his performance in Clemson’s 35-17 victory over South Carolina. However, Scott has taken his game to a whole new level and showed Saturday he could be a force to be reckoned with in the return game. He worked both punt return and kickoff return in the game and completely reversed the field on one of his attempts for an extra 10 yards. On his touchdown, Scott went up and over a defensive back who had a significant height advantage over the sophomore receiver.

Mike Williams
Jr. Wide Receiver
#7 6-4, 210
Vance, SC
View Full Profile will be eligible for the NFL Draft after this season and if he continues to work hard could very well be a high draft pick. Williams had a ridiculous one-handed catch on the sideline to keep a drive going. Charone Peake

Charone Peake
Gr. Wide Receiver
#19 6-2, 205
Moore, SC
View Full Profile is finally healthy and it shows. He looks like the receiver we’ve all been expecting since he arrived at Clemson – looks crisp running his routes and made the catches. He took a crossing route from Tucker Israel

Tucker Israel
Fr. Quarterback
#10 5-11, 190
Orlando, FL
View Full Profile for a long gain in the first half and showed a tremendous burst. He looks the best he’s looked in two years.

*If there has been one criticism of Clemson over the last few years it has been in the return game. Obviously, you can’t tell a lot from the spring game but it looks like the Tigers have finally found a good combination with Scott, Hopper and T.J. Green

*There is no question who Clemson’s second string quarterback is coming out of the spring. Nick Schuessler

Kelly Bryant
Fr. Quarterback
#2 6-4, 205
Calhoun Falls, SC
View Full Profile had their bright spots and showed flashes, but Schuessler was able to complete his passes and showed good escapability and quickness in the run game.

Andy Teasdall
RS Jr. Punter
#95 5-11, 185
Winston-Salem, NC
View Full Profile . Teasdall had two punts in the Russell Athletic Bowl but showed that he is more than capable to take over for the departed Pinion. Kickoffs, however, are a different story. Christian Groomes

Alex Spence
RS Fr. Kicker
#47 6-2, 190
Florence, SC
View Full Profile both worked on kickoffs. Spence left several of his attempts five-plus yards short of the goal line. Groomes hit a line drive into the endzone, but didn’t get much hang time. It will be interesting to see who comes out of the summer as the guy.

Late in the game, Lakip had the first touchback of the day.

*All of the running backs showed that they are capable of being the first string guy. Wayne Gallman

Wayne Gallman
RS So. Running Back
#9 6-1, 205
Loganville, GA
View Full Profile bowled us way up the middle right off the bat and showed his speed on the outside and he should be the number one guy heading into fall camp. He had a 60-yard run early.

Tyshon Dye
RS So. Running Back
#22 5-11, 215
Elberton, GA
View Full Profile looked like the running back we all expected before his injuries. He is difficult to tackle running up the middle and showed an uncanny ability to avoid tacklers. Zac Brooks

C.J. Fuller
RS Fr. Running Back
#27 5-9, 215
Easley, SC
View Full Profile will be a really good player once he learns the offense a little more.

Kevin Dodd
RS Jr. Defensive End
#98 6-5, 275
Taylors, SC
View Full Profile . Both won their share of the battles but also showed that they have a long way to go before they’re ready to play. Keep in mind – they are 18-year old kids going against guys who have been in the program for three or four years.

Jalen Williams
Fr. Linebacker
#30 6-0, 215
Columbia, SC
View Full Profile are both young linebackers but both made their presence felt early in the day. In the first quarter it seemed like every time a tackle was made for the White team, Joseph’s name was called. Williams did the same for the Orange team.

Brent Venables
Def. Coordinator / Linebackers
View Full Profile has to get some of the younger corners grown up quick over the summer. Can 2015 commit Mark Fields

*The defensive lines looked decent – we didn’t see them really getting knocked off the ball – but there were issues in the second and third levels. The young linebackers let their eyes get the best of them and got out of position more than once. Same thing with the secondary. The linebackers for the Orange team - just didn't perform as well as we would have expected.

*FINAL KEY OBSERVATION: It appears the Tigers got out of the spring game without any significant injuries.

*We will have more after interviews.