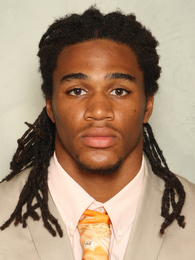 2015: Backup running back gained 234 rushing yards on 41 carries, with three touchdowns in 14 games ... also had nine catches for 113 yards and two scores ... made a triumphant return from injury with a memorable 25-yard touchdown run in the opener against Wofford ... recovered onside kick to seal the win over No. 6 Notre Dame ... hit career-long 35-yard touchdown rush in win over Georgia Tech ... scored on 21-yard reception the following game against Boston College ... posted one of Clemson’s seven rushing touchdowns at Miami ... caught a 35-yard screen pass for a touchdown at NC State ... had a 24-yard rush at Syracuse ... played well in the National Championship Game against Alabama, with a career-high four catches for 39 yards from the backfield.


2014: Redshirted ... suffered a foot injury in the preseason and missed the season.