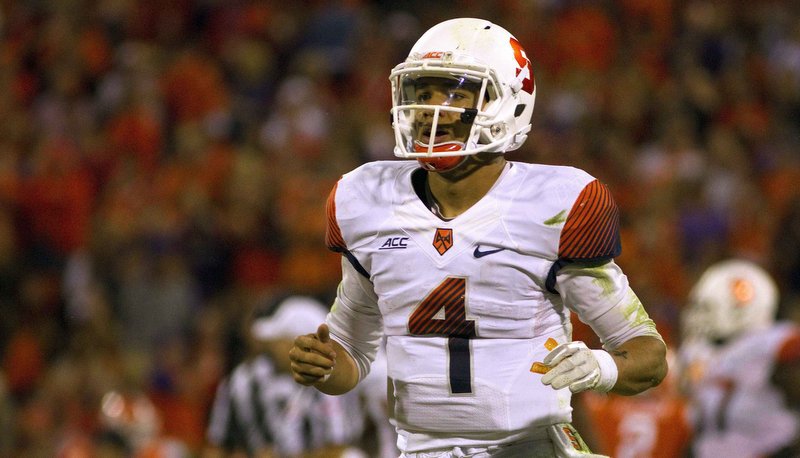 CLEMSON – It wasn’t pretty but the Tigers got the job done once again.

Clemson beat Syracuse 16-6 in Death Valley Saturday night on the backs of the defense, with just enough offense sprinkled in.

C.J. Davidson
RS Jr. Running Back
#32 5-10, 203
Clemson, SC
View Full Profile also had a critical fumble. However, the offense was able to overcome the plethora of mistakes and get a late touchdown when Stoudt found tight end Stanton Seckinger

Changing of the guard on the offensive line? Redshirt freshman guard Tyrone Crowder

Kalon Davis
RS Sr. Offensive Guard
#67 6-5, 340
Chester, SC
View Full Profile moved to left tackle. Crowder got his chance late in the first half, and he moved people off the line of scrimmage and many times the Clemson running backs ran right behind him. Eric Mac Lain

However, not many people would call Saturday’s effort by the line a good one - it was just good enough to win.

Wayne Gallman
RS Fr. Running Back
#9 6-1, 209
Loganville, GA
View Full Profile rushed for 101 yards on 28 carries, averaging 3.8 yards per carry. It was his tough running that ran out the final eight minutes of the game. Gallman isn’t afraid of contact between the tackle and can also break the long run on the outside. The previous high for a Clemson running back was 77 yards, earned by Gallman against S.C. State. Adam Choice

Adam Choice
Fr. Running Back
#26 5-10, 211
Thomasville, GA
View Full Profile had 74 yards in that game for the second-highest total.

Ammon Lakip
RS Jr. Kicker
#36 5-10, 200
Alpharetta, GA
View Full Profile Clemson’s place kicker got off to a rocky start to begin his first season as a starter but without his kicks Saturday night, Clemson loses the game. Lakip was 3-for-3 on the night, with a long of 42 yards.

Defense Clemson’s defense continues to dominate teams. Syracuse only had 170 total yards Saturday night – 88 on the ground and 82 through the air. Opponents have only converted 6-of-47 third down attempts over the last three games. The defense also forced three turnovers – a fumble recovery by MacKensie Alexander

Stephone Anthony
Sr. Linebacker
#42 6-2, 244
Polkton, NC
View Full Profile . It’s frightening to imagine where Clemson would be without the defense playing at an elite level.

Tyshon Dye
RS Fr. Running Back
#23 5-11, 214
Elberton, GA
View Full Profile - The Clemson coaches said the freshman running back would play this week, but he didn't sniff the field as Gallman and C.J. Davidson carried the rushing load.