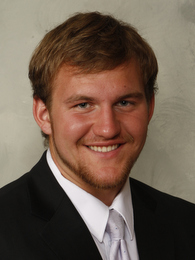 Offensive Guard
B I O
Began his career as a tight end, but has since moved to the offensive line and has grown into a first-team all-conference performer and one of Clemson’s greatest leaders in recent memory ... has logged 1,434 snaps over 53 games in his career ... winningest player in Clemson history, he has played in 46 Tiger wins (with just seven losses) in his career.

2015: Nominated for the AFCA All-Good Works Team in the preseason ... preseason first-team All-ACC selection by a vote of the league’s media... First-team All-ACC (media, coaches) ... All-ACC Academic Team selection ... has third-most knockdowns on the team with 32, and has played line-high 1,011 snaps on the season ... graded 91 percent in the opener against Wofford ... posted a pair of knockdowns at Louisville, paving the way for Wayne Gallman’s 139 rushing yards ... paved way for 200-plus rushing yards against Notre Dame with a line-best 88 percent grade in 60 snaps ... named co-offensive player-of-the-game by the coaches ... helped pave way for 500-plus yards of total offense against Georgia Tech with an 88 percent grade in 67 snaps ... graded 87 percent in big win over Boston College ... played 54 snaps with 2.5 knockdowns in 58-0 win over Miami ... graded 90 percent in playing all 80 snaps at NC State, where Clemson rolled to 623 yards of total offense ... shared team-high honors with 93 percent grade in win over Florida State, while collecting four knockdowns ... graded 90 percent with three knockdowns at Syracuse ... played all 74 snaps at South Carolina, with a 91 percent grade ... earned 91 percent grade and played all 98 snaps in the ACC Championship Game against North Carolina, when the Tigers posted over 600 yards of total offense and scored 45 points ... graded 91 percent in the Capital One Orange Bowl with three knockdowns, including a memorable one that propelled Deshaun Watson to a rushing touchdown.

Before Clemson: Rated as the No. 59 player in the nation and No. 6 tight end by Rivals.com ... played in the Shrine Bowl and the Offense-Defense All-American Bowl ... one of the top-250 players in the nation and No. 9 tight end by Scout.com ... No. 6 tight end in the nation by SuperPrep ... had 26 receptions for 393 yards and six scores as a senior at Jack Britt High School ... had 42 catches for 575 yards and eight scores in his career ... a big reason his team rushed for 12,000 yards over the last three years ... had 93 solo tackles, eight sacks, four caused fumbles, four recovered fumbles and one interception in his career ... punted 70 times for a 45-yard average ... first-team all-conference for four years and first-team all-region as a junior and senior ... all-state by North Carolina Preps and a four-year all-conference selection ... three-year All-Cape Fear Valley Region member ... named a Badger Sports Preseason All-American ... helped his school to a 50-8 record as a four-year starter, the best four-year record in school history ... played on two conference, two Eastern Regional and two state runner-up teams ... sophomore All-American by MaxPreps.com ... most valuable wide receiver as a junior and team MVP as a senior ... four-year letterman on the basketball team ... played on two conference, two sectional and two Eastern Regional championship basketball teams ... outstanding student who is in the National Honor Society ... coached by Richard Bailey at Jack Britt High ... recruited by Dan Brooks.