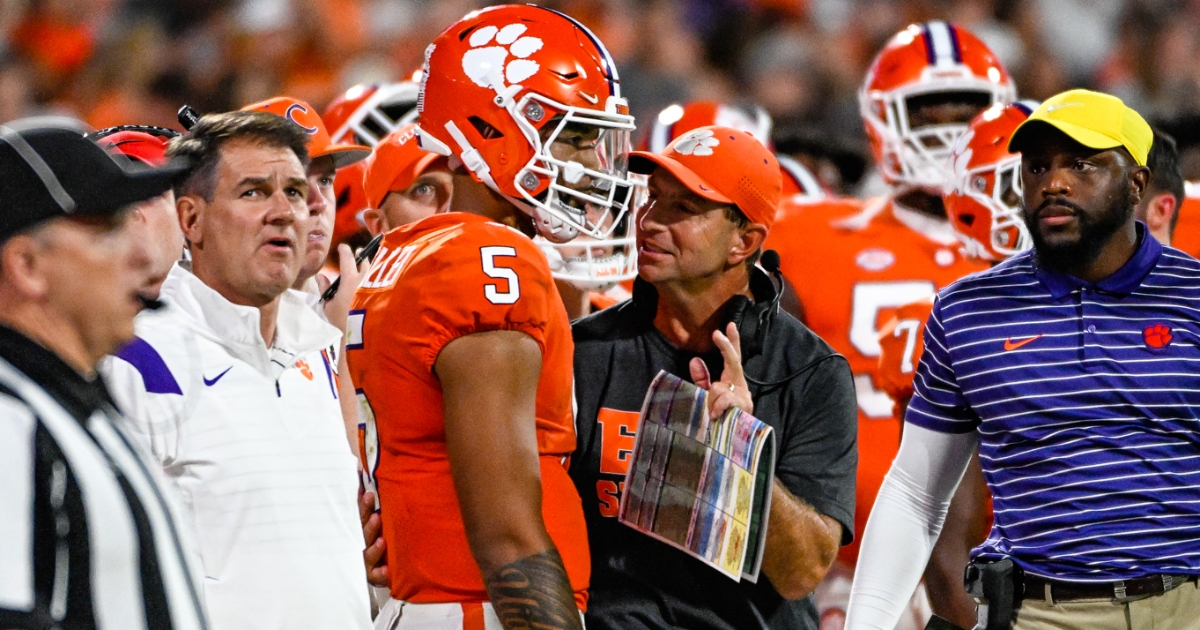 Clemson coach Dabo Swinney says starting QB DJ Uiagalelei is "back on the mat with a two count" after the rivalry loss.

This past Monday was an afternoon that those who are regularly inside Clemson’s football facility will never forget.

The secretaries were watching the clock, hoping to head home before the late fall darkness descended on Clemson. A myriad grouping of other employees were performing their tasks with no idea what was about to happen.

What happened? Head coach Dabo Swinney gathered everyone inside the facility to watch the replay of Clemson’s 31-30 loss to South Carolina. It wasn’t the fact that Clemson lost – losses happen – it was how it happened to a team that Swinney feels isn’t as talented as his Tigers. It happened because of poor play at several positions and poor execution across the board.

And everybody had to watch it.

Swinney appeared on the Gramlich and Mac Lain Podcast with Kelly Gramlich and Eric Mac Lain this week to preview this week’s ACC Championship against North Carolina, and Swinney was asked how he handles talking to quarterback DJ Uiagalelei after a game like that, who wasn’t the main reason Clemson lost but is held as the scapegoat by many.

“Tell them the truth. This hasn't happened very often because we don't lose a lot of games. So our Mental Monday meeting, I made everybody in the building, from the secretaries to the administrative staff, everybody in the building had to watch the tape. We watched it all together,” Swinney said. “And I ran the tape from about 4 pm to 6 pm, for two hours. Because when you lose a game like that, you get a lot of this (mimics people talking) and everybody on the outside thinks they know and they ain't got a freaking clue. So, I think it's important that everybody knows what's real and that everybody understands with complete clarity what happened and why and what we have got to do about it.”

Swinney said the meeting drove his point home, even for the secretaries.

“It was a two-hour meeting of complete clarity, and so you just tell everybody the truth. It's not complicated, and when you don't do the things that you need to do, you don't deserve to win,” Swinney said. “So, I pulled out the plays that we needed, offensively, defensively and special teams. And you just kind of stop the projector and you say, okay, let's talk about it. So why are your eyes not on your work? Do we not go over it? Do we not practice? Is this a new play? This is all about execution. The quarterback is no different. You tell them the truth. But I think it's also important because of what you say, because everybody blames everything on the quarterback, and that would be an easy decision, but it's not.”

Uiagalelei isn’t completely at fault, but it sounds like he will be on a short leash this week in Charlotte.

“Now again, he's back on the mat with a two count, so he's got to play well, but you know, that's just where we are,” Swinney said. “So, tell him the truth. He has to take ownership of his place. But then also everybody needs to see what we didn't do around him.”

Swinney listed several plays that the Tigers could and should have made but didn’t, and said that everyone has to do their job for the offense to be successful. And when it isn’t, you make everybody watch the tape.

“Tell the truth. Be transparent. And this ain't middle school,” Swinney said. “So, Mental Monday? It was a good one.”