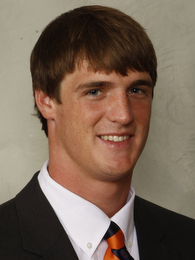 Before Clemson: Record-setting wide receiver at Porter-Gaud School ... had a school-record 105 receptions for 1,833 yards and 26 touchdowns as a senior ... had four receptions for 157 yards and two scores in a playoff game against Orangeburg Prep ... led his team to an 11-2 record and the state championship game ... second-team All-American by Rivals.com ... No. 14 player in South Carolina by SuperPrep ... first-team All-Lowcountry by Charleston Post & Courier ... named the SCISA Mr. Football by High School Sports Report ... played in the SCISA Shrine Bowl, where he had nine receptions for 334 yards; named team offensive player-of-the-game for that performance ... played in the NUC Gridiron Classic in Charleston, S.C. ... had 58 receptions for 1,095 yards and nine scores as a junior ... had 58 tackles and three interceptions as a junior ... starter on the basketball team ... team MVP of his football, basketball and track teams and all-state in all three sports ... had a 6’63/4” mark in the high jump (state record) ... member of the state championship 1,600m relay team ... coached by Rick Reetz at Porter-Gaud School ... recruited by Dan Brooks.