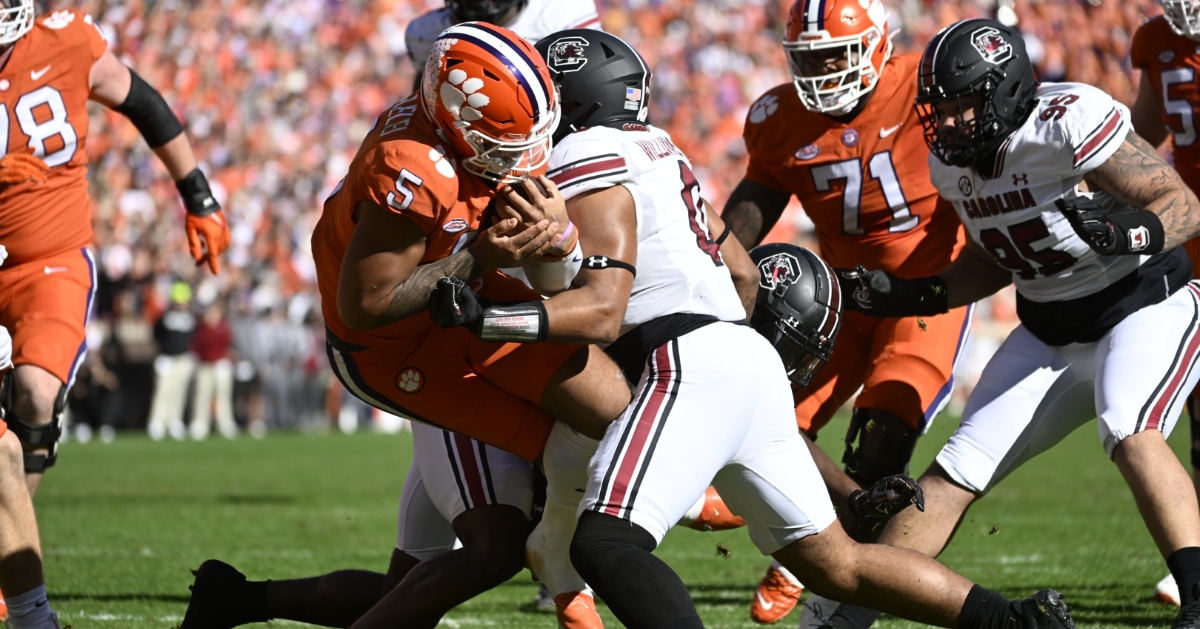 Uiagalelei passed for less than 100 yards.

CLEMSON – South Carolina’s offense did what Clemson’s offense refused to do, and several streaks were broken in Death Valley as South Carolina claimed a win in the rivalry with a thrilling 31-30 victory over No. 8 Clemson.

Clemson’s 40-game home winning streak? Broken. The seven-game winning streak in the rivalry? Gone. Clemson’s chances at the College Football Playoff? Wasted with another dismal effort from the Clemson offense.

In short, Clemson was out-played and out-coached with everything on the line.

Spencer Rattler threw for 355 yards on 24-of-38 passing and the Gamecock defense stifled Clemson’s offense for most of the second half. Clemson quarterback DJ Uiagalelei was a miserable 8-of-29 for 99 yards. Clemson rushed for 237 yards, with Will Shipley gaining 132 yards on 15 carries.

The Tigers had one final chance to win the game following a South Carolina punt, but returner Antonio Williams fumbled the ball away on the return and the Gamecocks were able to run out the clock.

"Obviously a tough day, but you have to congratulate South Carolina and Shane. They flat-out earned it. Heart breaks. Obviously you never, ever want to lose," head coach Dabo Swinney said after the game. "And there's probably a reason nobody has won eight in a row in this series. Heart breaks for these seniors but man I love those guys. My love is unconditional for them. Not a feeling that we've had in a long time but that's our reality today.

"Field position was bad most of the day. Turnovers caught up with us today. Incredibly frustrating; so many opportunities. Hate it for our fans."

The Tigers got off to a fast start, thanks to the defense. The teams traded punts to start the game and on South Carolina’s second possession, Spencer Rattler dropped back on first down and threw a pass down the seam that was intercepted by Jeremiah Trotter. Trotter raced untouched 35 yards for the touchdown and a 7-0 lead.

Following another South Carolina punt, Clemson took over at its own 10 and Shipley picked up gains of 15 and 10 yards to get the Tigers out of the hole. Shipley then took it 47 yards to the South Carolina 13 and two plays later Uiagalelei scored from nine yards out and Clemson held a 14-0 lead with 5:52 to play in the first quarter.

A short punt and a short field allowed South Carolina to get points on the board early in the second quarter, with Rattler hitting Antwane Wells in the back of the endzone for a 4-yard scoring pass.

Clemson’s offense went stagnant, but a 52-yard punt by Aidan Swanson pinned the Gamecocks at their own two. On the first play, Ruke Orhorhoro flushed Rattler who threw the ball away with no receiver in sight. That was called a safety and Clemson led 16-7.

What followed allowed South Carolina to score. The short kickoff was fielded by Shipley, who ran into a group of his own players and handed the ball to Phil Mafah. Mafah tried to hit the sideline but fumbled it away to the Gamecocks, who scored four plays later on a four-yard run. South Carolina was back in it, trailing 16-14 at the 8:24 mark of the second quarter.

After the ensuing kickoff, Uiagalelei hit Beaux Collins for a 59-yard pass down to the Gamecock 15. Three plays later Uiagalelei hit Antonio Williams in the corner of the endzone for an 11-yard touchdown. At the 6:14 mark Clemson led 23-14.

South Carolina converted on a 4th-and-1 at its own 34 with Rattler hitting a wide-open JuJu McDowell for 59 yards, setting the ball at the Clemson one-yard line. However, Clemson’s defense stiffened and Rattler was intercepted by RJ Mickens in the endzone to stop the drive.

The Tigers put together an ineffective three-and-out to start the second half, and a short punt (38 yards) was returned 37 yards by Ahmarean Brown to the Clemson 26. Four plays later Jaheim Bell bullied his way to paydirt and it was 23-21 early in the third.

The teams traded punts, but Kai Kroeger’s 61-yarder was returned 23 yards by Antonio Williams to the South Carolina 47. The Tigers went to the ground on the drive, running five of the six plays and scoring on an 11-yard run by Shipley. Shipley looked to be stopped at six but carried a Gamecock defender and ran through another on his way to the score, and with 4:35 remaining in the third Clemson led 30-21.

It took the Gamecocks exactly two plays for the Gamecocks to answer, with Rattler hitting a wide-open Antwane Wells for a 72-yard easy pitch-and-catch, making it 30-28 with 3:45 to go in the third quarter.

Clemson’s offense failed to gain any traction again, and the Gamecocks put together a drive that ended early in the fourth quarter with a 35-yard field goal. For the first time since the first quarter of the 2018 game (7-0), the Gamecocks held a lead in the rivalry game at 31-30.

Clemson’s offense remained mired in a funk, but the defense continued to hold, forcing a South Carolina punt with a little over two minutes to play. Antonio Williams fielded the ball and turned to head upfield but fumbled it away, giving the Gamecocks the ball at the Clemson 45.

The Tigers face North Carolina (9-3 overall, 6-2 in the ACC) next Saturday in Charlotte in the ACC Championship Game. Kickoff is set for 8 pm (ABC) at Bank of America Stadium.