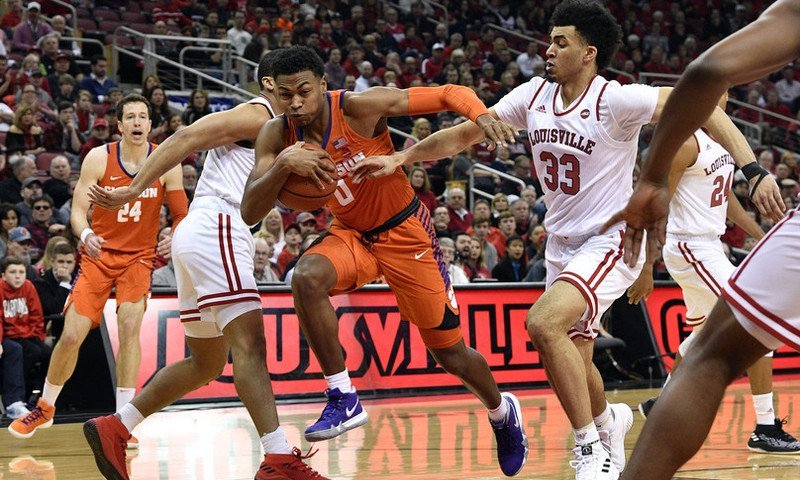 Clemson’s run of near-misses on the road continued with a 56-55 loss at No. 16 Louisville Saturday.

The Tigers (15-10, 5-7 ACC) led for much of the second half, holding the Cardinals (18-8, 9-4) to 3-of-15 shooting on 3-pointers with six to go. But Steven Enoch kick-started Louisville’s long-range game with a 3-point make to put the Cardinals up one with 5:59 left and then Darius Perry and Christen Cunningham treys followed to anchor an 11-2 run.

Elijah Thomas led Clemson’s answer with six-straight points to get back within a point, but with an opportunity to tie or take the lead, two free throw attempts from Thomas and a Marcquise Reed shot were off the mark with a little over a minute left.

Louisville extended its lead to as much as seven points with under 20 seconds left but Clemson battled back by forcing Cardinal turnovers - Reed knocking down a three with three seconds left to get within one. The ensuing inbounds pass was stolen and Reed appeared to have an open lane for the runner - only to be blocked by Louisville's Jordan Nwora and a desperation attempt from John Newman was off the mark before the clock ran out.

The loss was a fifth by single-digits on the road in conference action for Clemson, which includes two defeats while holding the lead nearly to the buzzer (at Miami and NC State).

Clemson entered the contest with a NET ranking of No. 42 and projections around the fringe of making the NCAA Tournament. The Tigers return home on Tuesday for a key conference matchup with Florida State (9 p.m./ESPNU).

Clemson set the tone early for a defensive struggle.

Louisville was held to its lowest first-half point total since the 2015-16 season, trailing 23-19 after 20 minutes (17 the previous low versus Virginia). The Cards made just 1-of-9 3-pointers and hit on 27 percent overall.

Notes (via Clemson): Marcquise Reed finished with 13 points and 12 rebounds … it marked Reed’s fifth career double-double … Reed’s 13 points give him 1,291 for his Clemson career – 17 shy of tying Sharone Wright (1991-94) for 21st on the all-time scoring list … it marked Reed’s 62nd double-digit scoring game at Clemson – leaving him eight shy of tying Butch Zatezalo (1967-70) and Larry Nance (1977-81) for 16th all-time in program history … Reed tallied two steals and now has 148 in his Clemson career – three shy of tying Andre Bovain (1990-94) for 12th on the all-time list … Reed tied his career-high with three offensive rebounds … it’s the fourth time in his career that he has grabbed double-digit rebounds and the second-highest total of his career (13) … Elijah Thomas now has 160 blocks in his Clemson career – 17 shy of tying Sharrod Ford (2001-05) for ninth on the all-time list … Thomas grabbed seven more rebounds and now has 579 for his Clemson career – just 25 shy of tying Horace Wyatt (1978-82) for 25th all-time … Clyde Trapp has made his last seven shots (4-for-4 against Miami; 3-for-3 against Louisville) and that marks the most consecutive made field goals for a Tiger this season … Clemson has now held an opponent to less than 20 points in a half four times in the last 10 halves … Clemson held Louisville to its lowest field goal percentage of the season (.352) … Trey Jemison played a career-high 12 minutes (doubling his previous high of six minutes) … Jemison picked up his fourth block of the season.