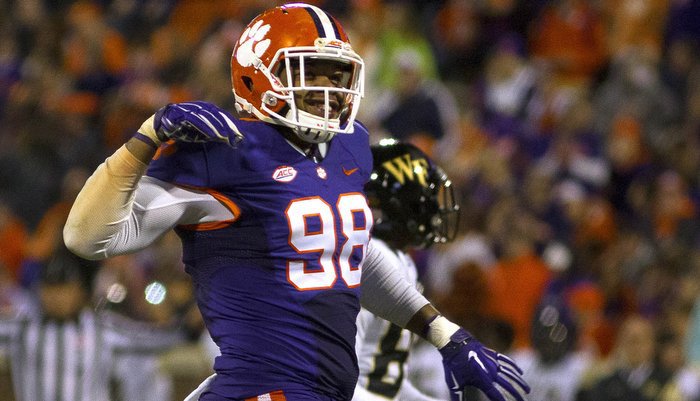 I will remember Saturday for Col. Ben Skardon getting the flag pole named after him, the French flag on the hill, Sean Mac Lain with the American flag, the seniors coming down the hill, the purple out, the student body singing happy birthday to Dabo, rain three times on a day where there was a zero percent chance of rain and two big announcements about other games.

Yes, perhaps the best moments from Saturday was the PA announcer informing the stadium that The Citadel beat South Carolina, and Michigan State beat Ohio State.

On the field, the Tigers grabbed control of this one early with a 20-0 lead in the first quarter. Clemson outgained Wake Forest 552-152. This was the same team that outgained Notre Dame last week. Clemson had 24 first downs and held Wake to 11.

This was not a perfect effort. Four turnovers have to be fixed. The Tigers couldn't run the ball partly due to two new offensive linemen and the absence of Wayne Gallman. The Tigers got another extra point blocked. No, this one was not perfect, but it wrapped up a perfect home schedule and a perfect ACC regular season.

Deshaun Watson was 24-of-35 for 343 yards and three touchdowns, with two interceptions. He also ran for 44 yards and a touchdown. Watson even lined up for several snaps at wide receiver, maybe setting something up for later in the season.

Germone Hopper continued to play well in the second half of this season with three catches for 120 yards and a touchdown. Charone Peake had a 44-yard touchdown reception. Deon Cain had another strong game with four catches for 29 yards a touchdown and a 35-yard completion on a trick play.

Defensively, the Tigers controlled the line of scrimmage. Clemson held Wake to 39 yards rushing on 32 carries. Ben Boulware was very active early but suffered a stinger and missed the second half. The good news is Jalen Williams got valuable experience and played well.

The other good news that came out of Saturday was the fact that many young players got valuable time, and several key injured players were not needed. Adrian Baker and Mark Fields took Mackensie Alexander's place. Maverick Morris once again took Tyrone Crowder's place. Hopper played well in place of Ray Ray McCloud. Gallman was missed but not needed. Kelly Bryant played a lot of snaps and once again showed his running strength and his weakness of downfield passing. Bryant was the Tigers' leading rusher and had the longest run of 21 yards.

The Tigers enjoyed a fast start and cruised to a 20-point win to close out senior day. We saw the senior class set the school record for wins and we saw the nation's number one team get what was another great win.