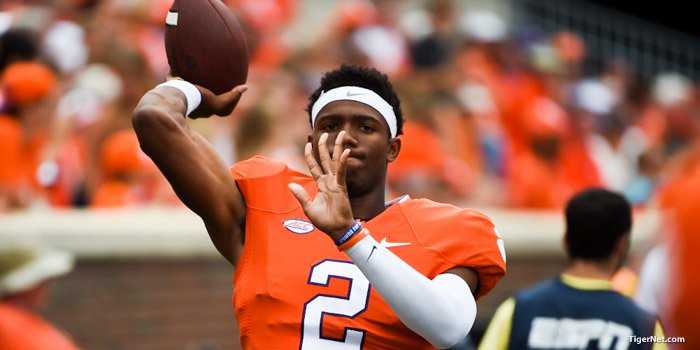 Today I wanted to look at the offense and some storylines to follow Saturday.

Dabo asked the fans to come out because this is most likely the last spring game for Deshaun Watson. However, I hope we don't see a lot of Watson Saturday. The primary mission Saturday is to stay healthy, and Watson is at the top of that list.

The real story at this position Saturday is the backup. Kelly Bryant might be the most important player Saturday. It is time for Bryant to take the next step. It is also his last chance to impress before Zerrick Cooper arrives on campus this summer.

Like quarterback with Watson, Wayne Gallman has nothing to prove this Saturday. The big item to follow this Saturday at running back is the depth. Adam Choice, Tyshon Dye, and C.J. Fuller have taken steps this spring. We will see how far the trio has come. Also like quarterback, this is the last time this group can impress before freshman Tavien Feaster gets to Tigertown.

Yesterday we stated that the defensive tackles may be the most talented group on campus. If they aren't, the wide receivers are. Mike Williams won't play Saturday, but the news is encouraging. Deon Cain also won't play, but his outlook is also looking positive.

The wide outs that will play are still good enough to grab headlines Saturday. Hunter Renfrow and Artavis Scott have little to prove. Ray Ray McCloud needs to show he can secure the football. Trevion Thompson has another shot to prove he can be more consistent and gain more trust from the staff.

The Tigers also return another All-American candidate at tight end in Jordan Leggett who returns for his senior campaign. Leggett won't do anything Saturday that can change his high status, but Garrett Williams and Milan Richard are two very talented rising sophomores that can elevate their roles with another strong performance Saturday.

It's nice to have positive feelings coming into a spring game about the offensive line. That hasn't been the case here often, but this group looks to be deep and talented. We know what to expect from Mitch Hyatt and Jay Guillermo. What I want to see is a jump from players like Jake Fruhmorgen, Tyrone Crowder, Maverick Morris, Justin Falcinelli, Taylor Hearn, Noah Green and Zach Giella. But maybe the biggest storyline Saturday on the offensive line is our first look at the true freshmen Tremayne Anchrum and Sean Pollard.

This may be the most talented group of offensive players Clemson has ever put on the field during a spring game. Just think, the freshmen class arriving this summer can make it even better.