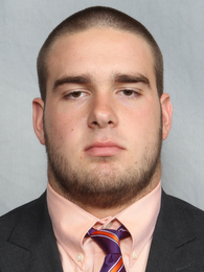 2016: Had four knockdown blocks in 174 snaps over 11 games … appeared in the Troy win for 23 snaps, posting an 83 percent grade with a pair of knockdowns … played 32 snaps against SC State … logged 18 snaps in win over Georgia Tech … played 17 snaps at Boston College, with a 94 percent grade … logged eight snaps in 37-34 win at Florida State … played 23 snaps against Syracuse, grading out at 87 percent … graded 90 percent in 30 quality snaps against South Carolina.

Before Clemson: Rated as the No. 12 player in Maryland by Rivals.com … No. 16 player in Maryland by 247Sports.com … three-time all-state selection … consensus first-team all-state as a junior and senior, and first-team all-state as a defensive lineman as a sophomore … member of the state championship team as a sophomore, junior and senior; his team was 41-1 in his three years as a starter, winning each of the last 36 games; also played as a freshman on a team that reached state championship game … played on both sides of the ball as a starter each of his last three years … had 108 career tackles, including 42 as a junior … outstanding lacrosse player who lettered four times … National Honor Society member, Maryland Scholar and an APEX Scholar … coached by Kevin Lynott at Middletown High School … recruited by Brent Venables.

Personal: His father, David, played football for one season at Notre Dame … his brother, Shane, attended Maryland on an academic scholarship (engineering) … graduated with a degree in management in December 2016 … born Sept. 18, 1995.