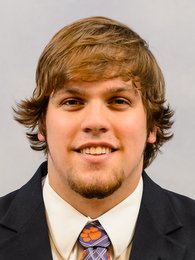 Offensive Line
B I O
Redshirt freshman who enrolled in January 2015 and has seen time at multiple positions on the offensive line.