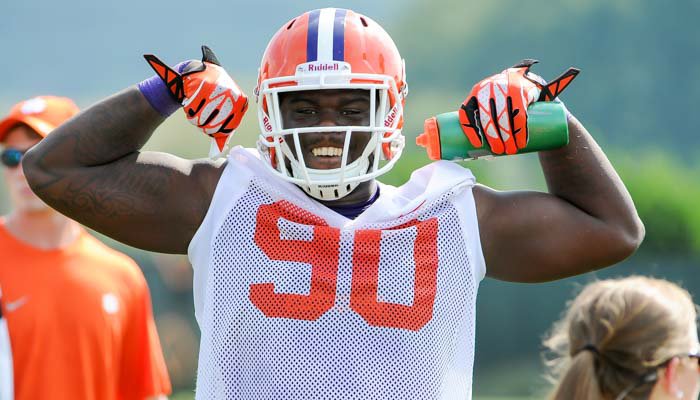 Shaq Lawson and the Clemson defense got to the QB repeatedly.

CLEMSON – Day three of 2015 fall practice is in the books and the defense is ahead of the offense, Jay Guillermo

The Tigers practiced in shells for the first time in camp Thursday afternoon, practicing outside for almost 30 minutes before a line of strong thunderstorms moved the practice into the indoor practice facility.

A good portion of the practice was spent with the offense going against the defense, and even quarterback Deshaun Watson

Deshaun Watson
So. Quarterback
#4 6-2, 205
Gainesville, GA
View Full Profile struggled to complete a pass as the defensive line got to the quarterbacks time and time again. For some of the Tigers’ young offensive linemen, it was a learning experience as defensive end Shaq Lawson

Brent Venables
Def. Coordinator / Linebackers
View Full Profile about Lawson after the practice, and he laughed and said Lawson is high-energy all the time.

“He’s laughing and giggling all the way to the quarterback,” Venables said. “He has always been a high-energy guy, but sometimes he didn’t want to always do the little things. Now he’s doing the little things.”

Mike Williams
Jr. Wide Receiver
#7 6-4, 210
Vance, SC
View Full Profile . One can only imagine that Brownell would like some help in recruiting Williams’ cousin De’Riante Jenkins.

*Speaking of basketball – former Duke and NBA star Mike Gminski was a visitor at today’s practice. Gminski’s son Noah – all 6-foot-6 of him – is a punter from Christ School in Arden, N.C. Clemson head coach Dabo Swinney

Dabo Swinney
Head Coach
View Full Profile walked over to meet the pair, looked up at the younger Gminski and said, “The last punter I had that looked like that is with the (San Francisco) 49ers.

*Thursday’s practice showcased the most special teams work that we’ve seen in the first three days. On three different occasions Swinney gathered the entire team to watch the field goal kickers. The first kick was from 35 yards. Alex Spence

The second kick was from 37 and Spence was the only one of the three to make the attempt.

The third and final kick was from 46 yards. Spence’s first attempt barely got off the ground after a bad snap, but he redeemed himself by making the second. Groomes hit the ball square but missed a couple of yards short. Huegel’s kick was good and would have been good from 50-plus yards.

Heugel is from Blythewood, and he made a 51-yarder in high school. While we haven’t seen a whole lot of the kicking competition through the first three days, Huegel has shown a big leg and it’s obvious it’s now a three-horse race.

Korrin Wiggins
Jr. Defensive Back
#12 5-11, 195
Durham, NC
View Full Profile who has played mostly nickel during his first two seasons has worked mostly with the defensive backs, while Travis Blanks

Travis Blanks
Safety (2012 - 2015)
#11 6-0, 210
Tallahassee, FL
View Full Profile who came to Clemson as a defensive back has worked with the linebackers after suffering two torn ACLs.

Jay Jay McCullough
RS Jr. Tight End
#89 6-3, 248
Fort Mill, SC
View Full Profile looked as good as I’ve seen him in practice. He caught the ball well and was extremely physical in blocking drills. If he can put it all together for an entire season and avoid off the field issues, he has a chance to have a breakout season.

Jordan Leggett
Jr. Tight End
#16 6-5, 250
Navarre, FL
View Full Profile is another one that coaches and fans have been waiting on to play on a consistent level. With his size and speed, Leggett is a matchup nightmare for anyone who tries to cover him and the Clemson defenders figured that out during Thursday’s practice.

Jalen Williams
Fr. Linebacker
#30 6-0, 215
Columbia, SC
View Full Profile is working at middle linebacker. He looked really good during 7-on-7 drills. He directs traffic well and is able to cover a lot of ground quickly. He has good sideline-to-sideline speed.

Kelly Bryant
Fr. Quarterback
#2 6-4, 205
Calhoun Falls, SC
View Full Profile ended practice going four-for-four and looks to be getting more comfortable as the practices progress. His timing and accuracy are getting better each day.

*Don’t think the offensive linemen were all bad – I was really impressed with Jay Guillermo today. Once Norton left with his injury, Justin Falcinelli

Justin Falcinelli
RS Fr. Offensive Tackle
#50 6-3, 305
Middleton, MD
View Full Profile took over at center and had trouble with a few snaps. Swinney waved Falcinelli off to the side and sent in Guillermo, who had a solid afternoon. In fact, Guillermo was good in all of the blocking drills and made the correct line calls during the scrimmage portion. Another couple of days like that and Guillermo will be firmly back in the competition for a lot of snaps.

Another lineman that had a good day was Taylor Hearn

Taylor Hearn
RS Fr. Offensive Line
#51 6-4, 325
Williston, SC
View Full Profile . Hearn didn’t get beat while we were watching, and I like his toughness and attitude. Another lineman that had a good day was Noah Green