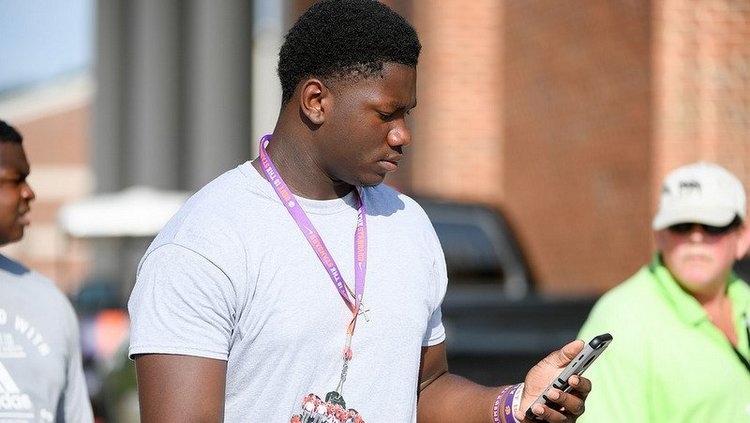 One visit was enough for Ruke Orhorhoro to get a feel for his college destination in Clemson.

Orhorhoro (River Rouge, Michigan) made his first stop in Clemson for camp this week and was blown away by what he saw.

“I had an amazing time. It was great. I could tell that the people were genuine,” Orhorhoro told TigerNet earlier this week. “I hung out with Coach V (Brent Venables) and Coach Swinney a lot. I got to know some of the players. I came with my high school coaches and we had a really fun time. It’s great down there…

“It was just great all in all. They were just telling me how they love me not only as a player but as a person. I’m genuine and I have good grades. They were telling me that I fit their scheme.”

Orhorhoro (6-5 263) is rated as high as the No. 39 weakside defensive end in the nation by 247Sports but he could also project as a defensive tackle at the college level.

He is a Nigerian native who has played one season of football and totaled 19 sacks, after playing basketball at River Rouge (Mi.) previously. He also had Michigan, Indiana and Kentucky in his top-four schools and reported offers from Oregon, Penn State, Boston College, Duke, Iowa, Iowa State, Michigan State, Minnesota, Missouri and Pittsburgh. Orhorhoro called Clemson a "dream school" when he received an offer in late April.

"First and foremost I want to thank God for blessing me with the physical abilities to play this sport, and blessing me with so many great people in my life," Orhorhoro posted on Twitter with his announcement. "I would like to thank the whole River Rouge community for helping me and maturing me into the man I am today, I'd like to thank my loved ones, previous basketball coaches, and those who invested their time in me. Without you all I would not be where I am today. I'd also like to thank my teammates for pushing me and being my brothers through thick and thin. Next I would like to personally thank each and everyone of the college coaches that gave me an opportunity to chase my dreams and be a part of their team and recruited me hard...

"I would also like to thank the entire River Rouge coaching staff, especially Coach Burkes and Coach Parker for staying by my side through this process and developing me not only as a player, but as a better man, lastly Rest in Peac to my mother who I know is watching over me right now....With that being said I have decided to be ALL IN and announce that I am 110% committed to Clemson University."

Clemson remained in fourth in the 247Sports Team Composite rankings for 2019, trailing only Alabama, Texas A&M and Oklahoma currently. He is the 15th commitment for the Tigers’ class, joining DBs Sheridan Jones, Joseph Charleston and Lannden Zanders, linebackers Keith Maguire and Bryton Constantin and defensive tackle Tayquon Johnson on the defensive side.

GREAT DAY TO BE A CLEMSON TIGER!!! #ALLIN #ClemsonFamily