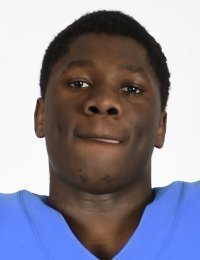 Defensive Line
B I O
Played high school football in Michigan, becoming the first Clemson football signee from the state of Michigan since 1975 (Joe Carolan) … athletic defensive end who played just two years of high school football … ranked as 15th-best overall player in Michigan by 247Sports, 18th-best by Rivals.com and 17th-best in Michigan by ESPN.com … born in Nigeria and came to the United States when he was nine … played basketball as a youth and in high school … averaged a double-double as a sophomore … the week after his sophomore season of basketball ended in the state semifinals, he met with the school’s football coaches and decided to join the team for spring practice … did not play his first football game until the fall of 2017 … had solid 2017 and received some offers from Michigan and Michigan State … as a senior in 2018, had 13 sacks and 22 tackles for loss to go with 60 tackles … scored a touchdown on a fumble return … helped team to an 8-2 season … played his high school football at River Rouge High School for Corey Parker … Clemson recruiters were Brent Venables and Lemanski Hall … has three cousins who played or are still playing college football, Michael Ojemudia (Iowa), Mario Ojemudia (Michigan) and Ovie Oghoufo (Notre Dame) … committed to Clemson on June 15, 2018 … plans to enroll at Clemson in January 2019 … first name rhymes with juke; last name pronounced Oh-roh-roh-roh.