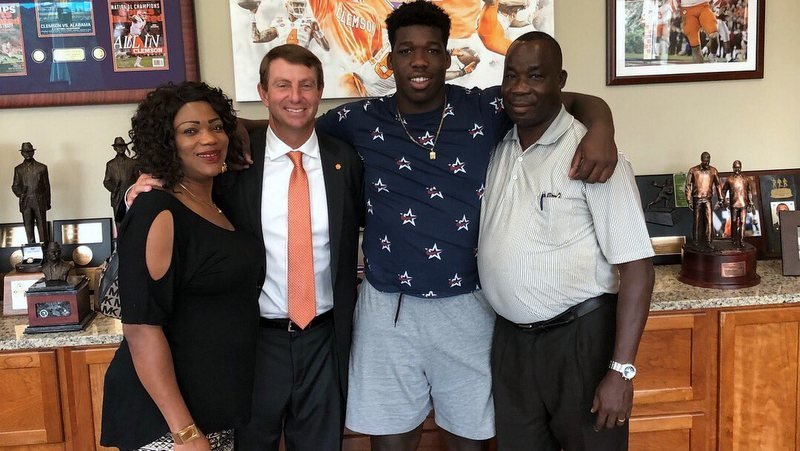 Reuben poses with his family Sunday after committing

The 3-star defensive end out of Kansas City (MO) Park Hill South committed to Clemson Sunday afternoon after visiting campus with his family this past weekend for the All In Cookout. He is the 21st commitment for the Tigers in the 2019 recruiting cycle.

The visit confirmed what Reuben was already thinking.

“I had a little dot in my mind that I would, but I just wasn’t sure,” Reuben told TigerNet about committing. “I just wanted to make sure by getting on campus that this was what I wanted to do.”

Reuben met with head coach Dabo Swinney and knew the decision he needed to make.

“It was right after my meeting with Coach Swinney,” he said. “We just talked about how he could see me fitting in and my role in the future. I just like the plan that we had set. I’ve been hearing them say that they could play me anywhere.”

His family supports the decision.

“They enjoyed the trip and their onboard on with the decision, so everything is good,” Reuben said. “When I stepped on campus, everybody felt sincere. I was immediately taken in by all of the commits and all of the coaches. Me and Coach (Todd) Bates’ relationship is really tight. Me, him and Coach V talk almost every day.”

Reuben also had offers from Ohio St., Alabama, Georgia, Wisconsin and Notre Dame, among numerous other suitors. He officially visited the Badgers and Buckeyes last month. Ohio St. was strongly considered, but Venables and the Tigers won the day.

“At my school, when he (Venables) first came to see me, he shook my hand and my track coach’s hand,” Reuben said. “My coach said, ‘Do you know whose hand you just shook? You just shook the hand of the best defensive coordinator in the game of football right now.’”

The decision was an easy one after seeing the campus and meeting with the coaches.

“I told Coach V first. It was me, him, Coach Bates and my parents and we were on the football field,” Reuben said. “I just said, ‘Coach V, I’m all in.’ I’m really excited to start the journey.’”

Reuben is the fourth defensive lineman to commit to Clemson in this class, joining Tayquon Johnson, Logan Cash, and Ruke Orhorhoro.