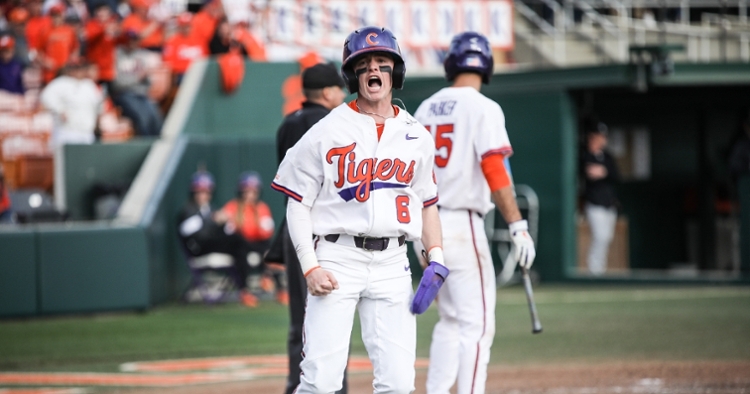 CLEMSON, S.C. – No. 21 Clemson totaled season highs for hits (14) and runs in its 12-5 victory over Boston College at Doug Kingsmore Stadium on Saturday afternoon. The Tigers, who took a 2-0 lead in the series, improved to 11-3 overall and 2-0 in the ACC. The Eagles dropped to 5-8 overall and 0-2 in ACC play.

Bryar Hawkins lined a two-run homer in the first inning, his first of the season, then Chad Fairey led off the second inning with a home run, his first of the year. Bo Majkowski added a run-scoring double in the second inning to build a 4-0 lead. Peter Burns led off the third inning with a home run to put the Eagles on the scoreboard, then they scored three runs on three hits in the top of the fourth inning to tie the score 4-4.

Clemson regained the lead in the bottom of the fourth inning with four unearned runs after a costly two-out error. Sam Hall’s flyball was dropped, allowing a run to score, then Elijah Henderson hit a two-run double and Kier Meredith added a run-scoring single to give Clemson an 8-4 lead. The Tigers scored three more two-out runs in the fifth inning, highlighted by Henderson’s two-run single. Adam Hackenberg added a run-scoring single with two outs in the sixth inning.

Henderson, Fairey and Majkowski had three hits apiece to lead Clemson’s 14-hit attack. Henderson and Fairey established a career high for hits, while Henderson totaled a career-high four RBIs for the Tigers, who scored each of their last eight runs with two outs.

Tiger reliever Carter Raffield (1-0) earned his first career win, as he allowed four hits, one run and one walk with one strikeout in 2.2 innings pitched. Eagle starter Joe Mancini (1-2) suffered the loss, as he yielded nine hits, 11 runs (seven earned) and four walks in 4.2 innings pitched.

The series concludes Sunday at 1 p.m. on ACC Network Extra. Kids can run the bases after the game.

Clemson-BC box
ONE DAY ONLY! Fanatics.com Black Friday Sale 20% off on orders over $75
Comment on this story