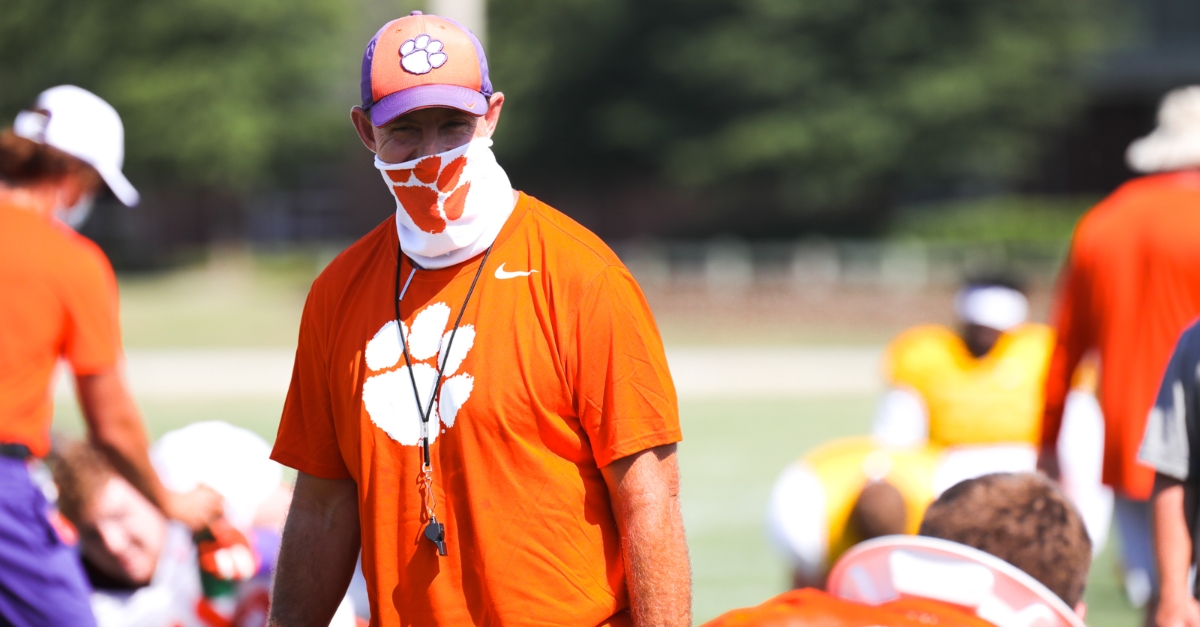 Swinney said his team is in a good spot. (Photo per Clemson athletics)

The Tigers open the season against the Wake Forest Demon Deacons at Truist Field on Sept. 12th.

*It was the last scrimmage, the second full scrimmage after a situational scrimmage last week. Today was a big day for a lot of guys in proving they are ready. Looking for as many dependable and functional guys as they can find. Today was a fun day. Mixed it up a lot. Lot of open field stuff, 2-minute work, 7 or 8 unique game specific situations they needed to challenge themselves on.

Lot of special teams work with special teams situations. Came through it pretty healthy. Lot of guys made big plays on both sides. Andrew Booth had his best day. Made some really good open-field tackles. Created most turnovers in camp. Malcolm Greene hadan an interception and RJ Mickens had one. The offense put the ball on the ground too much. Swinney really likes where they are as a team.

*Monday starts game prep. They don’t have to worry about redshirts but travel rosters and depth chart. This tape very beneficial.

*On NCAA waiver decision (everyone getting an extra year): will be challenging but it is the “right thing to do.” With Xavier Thomas, they knew he would be ready at some point but the plan was to try and hold him and get him ready for latter part of the season, but now don’t have to worry about that. He said he played five years at Alabama and “would have played six if they had let me.” Mentioned that Trevor Lawrence has three years now.

*Clemson is one of the few teams in the country that can handle losing players to COVID because they’ve always played a lot of players and built quality depth. Will serve them well in this situation. On that point, he said he is so proud of his guys because he gave them last weekend off, tested Monday, had zero positives. Will be tested again later this week, and will be tested three times per week once the season starts. Said his guys have managed this well and created their own bubble.

*Emergency non-quarterback they would have to play, if the quarterback position was compromised, would be Derion Kendrick (would be wildcat quarterback). But Swinney says they have to mitigate close contact.

*Creating depth along the OL, guys are cross-training. Tayquon Johnson was back and Blake Vinson is still working his way back.

*As far as health, Clemson is in the best spot it has been. Last week they were pretty beat up. Guys are now in a much better place and going from yellow to green. Sage Ennis has been back at practice (mono). Etinosa Reuben is back. Tyler Venables was out today (hamstring). Chez Mellusi is better but not quite back.

*Kendrick was a good player last season, but relied on athleticism. Night and day better this year. More complete player now. Really excited about what he’s done. Great time to coach corners at Clemson, Swinney said Mike Reed has done a great job building his room. Younger guys have high end talent. Greene is as good as anybody they’ve signed.

*Justyn Ross is running and catching tennis balls and working on his craft. Progressing really well. Swinney is hopeful and prayerful for him. Next big appointment for him is late December or early January.

*KJ Henry has had a great camp. Going to be a guy that will be a major contributor.

*At QB, this tape will be good to see where the backups are. Can’t wait to see the game tape and get feedback from the assistant coaches. Said the good news is they have good players.

*Kicker BT Potter is in another place confidence-wise. Has grown and matured into his role. He has handled the adversity and the success really well. The momentum to finish the season last year carried over into the spring. He has had a bunch of competitive kicks in camp, 60-plus, and had two game-winners today.