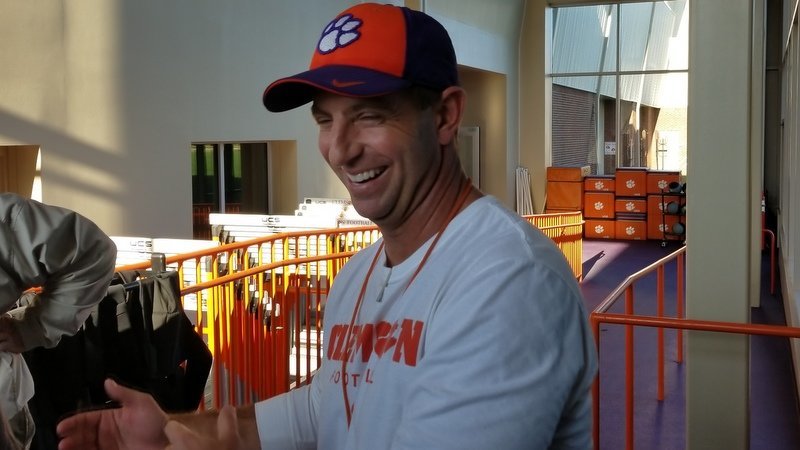 Swinney was happy after Monday's practice

CLEMSON – Clemson head coach Dabo Swinney was in a good mood following Monday’s practice. With one of the nation’s most talented rosters and experience across the board, he has reason to be as spring practice nears the midway point.

Swinney talked about how proud and happy he is for basketball coach Brownell. He talked about how happy and proud he is of baseball coach Monte Lee. He even asked which media members were going to San Diego for the NCAA Tournament and started giving out advice for things to do and places to see.

Also – if you were in San Diego in 2014 and out on the boardwalk with a big, purple Clemson chair (with a Tiger paw), Swinney dropped by to see you but you were playing in the surf. Swinney said he was out there walking when he saw the chair and hoped to meet the Clemson fans who owned it, but after a few minutes of waiting went on his way.

If that was you, maybe you can make it happen again someday.

As for football, Monday’s practice featured visitors from all over the map.

“That’s a friendship that’s developed over the last couple of years. Neil Brown of Troy was here today. The Oklahoma State offensive staff is here. We’ve had a lot of people come through. A lot of high school coaches. That’s one of the fun things about this time of year.

“Usually, you get an opportunity to speak with a lot of people and study...I appreciate those guys coming. I always tell people, if you’re coming you can’t just withdrawal, you have to deposit too. We try to learn as much as we can. We’ve got our coaches clinic coming up in a couple of weeks. Coach (Doug) Pederson from the Eagles is going to come be our speaker.”

The Tigers will have a big scrimmage Wednesday.

“We just had day seven. Our first scrimmage is Wednesday. The first half of spring has been a lot of installation, a lot of what to do, a lot of how to do it,” Swinney said. “Now, we’ve got to go see where they are and see who can really put it together. We’ve got to see how many consistent, dependable guys we can find and develop. It’s been a lot of fun. This is probably the fastest first half of spring I’ve been around...We’re having a lot of fun. The guys are competing.

“Hopefully, we can continue to stay healthy. We’ve been pretty fortunate in this first half, but sooner or later you’ve got to go play. That’s kind of what Wednesday is about. We tried to cover all of the situations in the first seven days and now we’re going to get everybody off the field and let them go play. Some of these guys, it will be their first time in a scrimmage setting. So far, so good.”

*Swinney said Jackson Carman has generated some buzz during camp. Said Carman needs to lose 20 more pounds but doesn’t mind failing. He said Carman will be able to bend better when he loses the weight. Swinney also noted that Carman has to face experienced defensive lineman and the exotic blitz packages of Brent Venables every day, so the learning curve is steep.

*It sounds like the wide receivers have had better days since Swinney called out the group last week, but freshman Derion Kendrick is still the one receiving the most praise. Jeff Scott told us that Kendrick has made the majority of the downfield plays in practice. Scott said that Kendrick is a natural punt returner, perhaps the most since Sammy Watkins was here.

*I asked Scott about the quarterback competition, and he made it sound like Hunter Johnson and Trevor Lawrence are pushing incumbent Kelly Bryant. Scott laughed when I asked about Lawrence’s arm strength, and he said the freshman is learning there are some throws he made in high school he can’t get away with in college. Likened it to a young child having to learn to not touch a hot plate.

*Swinney said the top three corners are Trayvon Mullen, Mark Fields and AJ Terrell. The others are coming on but there is clear separation between those three and the rest.

*He said that Denzel Johnson and Nolan Turner are having great springs at safety, as has K’Von Wallace. Isaiah Simmons is still taking reps at safety but is getting most of the action at the SAM spot.

*Swinney said that Xavier Thomas and KJ Henry are pushing the starting defensive ends in practice. Xavier Thomas walked off the practice field with Clelin Ferrell, and it was evident he was soaking in everything Ferrell had to say. Ferrell, Austin Bryant and Christian Wilkins all returned for another year, and that will pay dividends this season. Their work with the young defensive linemen will pay off well down the road.