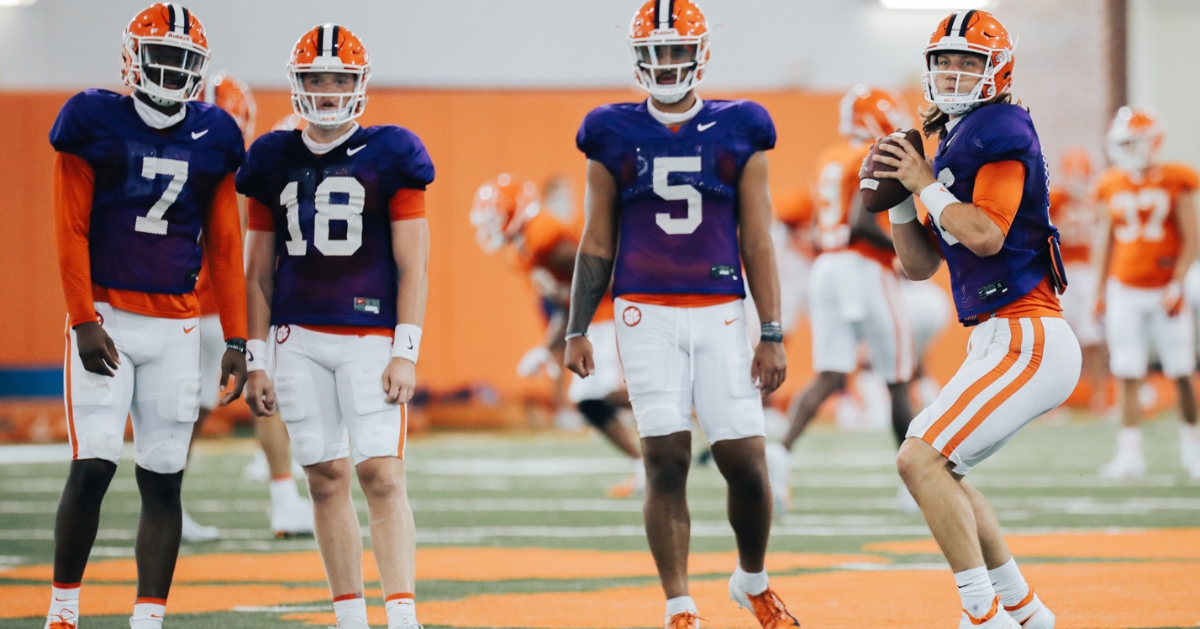 Fall camp will shortly be in the books and the Clemson football team will begin preparations for the season. All is not normal, however.

Fall camp usually ends with the start of school – classes do begin Wednesday – and the return of students to campus and the First Friday Parade are all highlights of the start of a new school year and the fall semester. The first game of the season usually occurs at some point in the next two weeks.

Students – some students – have returned to campus. However, all learning will be online until at least Sept. 21st, and the season won’t begin in just a few weeks. Instead, the Tigers have 26 days until the opener at Wake Forest.

The Tigers will practice today and have another scrimmage Tuesday before taking the day off Wednesday for the start of school. In the interest of safety, the media hasn’t been allowed to be at practice or do in-person interviews (as long as we have a season, I am OK with it), but that doesn’t mean the phone doesn’t work and we can’t gather info from the things we are hearing.

Here are some of the things we’ve heard and we are watching:

*A lot of us wondered how Jeff Scott taking the head coaching job at South Florida would affect the Tigers. Scott is a top-notch recruiter and one of the co-offensive coordinators and he was replaced by Tyler Grisham. By all accounts, Grisham has been better than anyone could have imagined. He is dynamite with recruits, and Tony Elliott spoke last week about how Grisham is a “technician” on the field.

Grisham has played in the NFL, he understands the route tree, and he is a dynamo at practice. There have been times over the last few years when we’ve noticed head coach Dabo Swinney working with the receivers, while Scott was with another part of the offense. Swinney is a great receivers coach, to be sure, but having the continuity of just one voice in the room can only pay dividends. And from all accounts, the receivers love Grisham’s approach.

He was put to the test during Saturday’s scrimmage – the top seven players in terms of yardage from 2019 didn’t play in the scrimmage. That includes starting slot receiver Amari Rodgers, who is out for COVID-19 protocols, and starting running back Travis Etienne. Tee Higgins is off to the NFL, Diondre Overton graduated, Justyn Ross is injured, and Joseph Ngata and Frank Ladson are still waiting to be cleared to play (protocols).

Grisham has had to recruit by Zoom, coach by Zoom, and now has attrition aplenty. And is still drawing rave reviews. He will be better in the long run for it.

*It sounds like DJ Uiagalelei is giving Taisun Phommachanh a battle for the backup quarterback job. Coaches like to use the media to push players – they will say a job is closer than it really is. Both Swinney and Elliott have said that this is one that might go down to the wire.

*At running back, everyone wants to hear about Demarkcus Bowman, but whenever we ask players or coaches about the freshmen, Kobe Pace is the one that’s mentioned. He’s a bowling ball of a back with speed and has rattled more than a few facemasks during drills and the scrimmage. We have no idea – none – how things will shake out this season and who will redshirt. But it will be fun to watch. It’s also good to hear that senior Darien Rencher is performing well and had a long run Saturday. His teammates love him and pull for him.

*It might be a good thing that there are still 26 days until the opener. Swinney told us Saturday that there are bumps and bruises aplenty on the offensive line, and that the first group was missing a few players.

*That defensive line is already looking far different than it did a year ago. Early returns are that this defense is going to be fun to watch. As one source told me, no one will be scoring on this defense save for a lucky bounce or a field goal. The kids? They’re legit.

*Lannden Zanders is another name that keeps popping up. The sophomore safety is easy to spot with the long hair coming out the back of his helmet and he’s easy to spot when he makes plays. These safeties are young and there will be some growing pains, but that’s a deep and talented group. And they are all thumpers. Out of the freshmen, Malcolm Greene’s name keeps popping up as well.

This defense will be fun to watch this season for sure. But think about next year and the year after that, will all this talent coming on board. It feels like it just gets better and better.