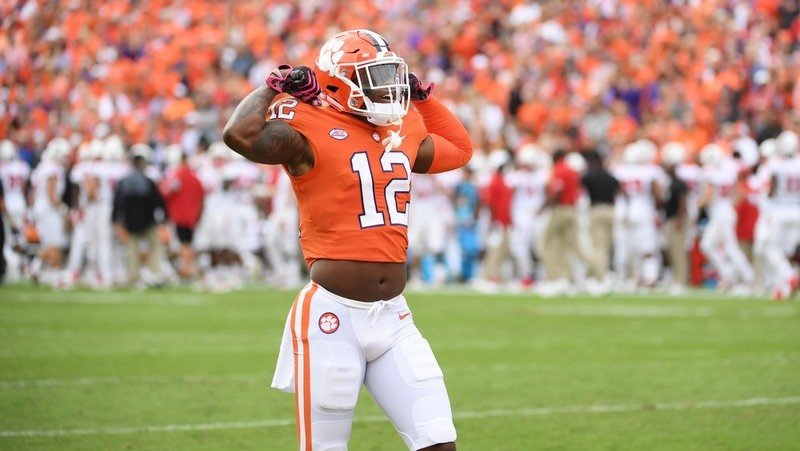 CLEMSON – Everybody in the country thought a 17-point spread for two unbeaten division rivals was crazy. Until it wasn’t.

Travis Etienne rushed for three touchdowns and Trevor Lawrence had his best day. Lawrence finished the game 26-of-39 for 308 yards and a touchdown.

OFFENSIVE PLAYER OF THE GAME: Tee Higgins is proving to be a consistent weapon at wideout and had a huge impact in Saturday’s game. He made big catch after big catch, especially down the sideline and was nearly unstoppable as N.C. State forced Clemson to beat them through the air. Higgins finished the game with eight catches for 119 yards and a touchdown. His touchdown was a 46-yard strike from quarterback Trevor Lawrence.

DEFENSIVE PLAYER OF THE GAME:K’Von Wallace and Nolan Turner share this honor this week. Wallace had a huge interception at the end of the first half to set up a Clemson field goal. He had 2 tackles… Turner – who Dabo Swinney always said would make an impact at Clemson – played a lot Saturday afternoon. He had a key stop on third down in the third quarter and fielded an on-side kick attempt after N.C. State’s first touchdown.

*Fast start – N.C. State won the toss and deferred, giving Clemson the ball first and the Tigers wasted no time getting on the board. The Pack played seven or eight defenders in the box, daring Lawrence to beat them through the air, and Lawrence used a 12-yard run and two passes to Tee Higgins to set up a three-yard scoring run by Etienne. With 11:23 remaining in the first quarter, Clemson held a 7-0 lead.

*Wallace’s INT – N.C. State elected to go for points instead of run out the clock and it cost them. On the second play from scrimmage, quarterback Ryan Finley’s pass was tipped in the air and intercepted by K’Von Wallace at midfield. Wallace managed to weave in and out of traffic and down the sideline, eventually settling for a 46-yard return to the Pack four-yard line with 19 seconds to play.

*Brice gets experience – With over 10 minutes remaining in the game, quarterback Chase Brice entered the game and he led Clemson on its longest drive of the day – eight plays and 84 yards in 3:37. Brice hit Justyn Ross a couple of times and Lyn-J Dixon did the rest, including a two-yard touchdown run.

STAT OF THE GAME: Travis Etienne is the first player in Clemson history to rush for three touchdowns in three consecutive games and just the third ACC player in the past 10 seasons with at least three rushing touchdowns in three straight games, joining James Conner in 2014 and Tevin Washington in 2012.

UP NEXT:Clemson travels to Tallahassee to take on Florida State in a noon matchup at Doak Campbell Stadium. The Seminoles defeated Wake Forest Saturday afternoon.

N.C. State travels to Syracuse to take on the Orange, who defeated North Carolina 40-37.