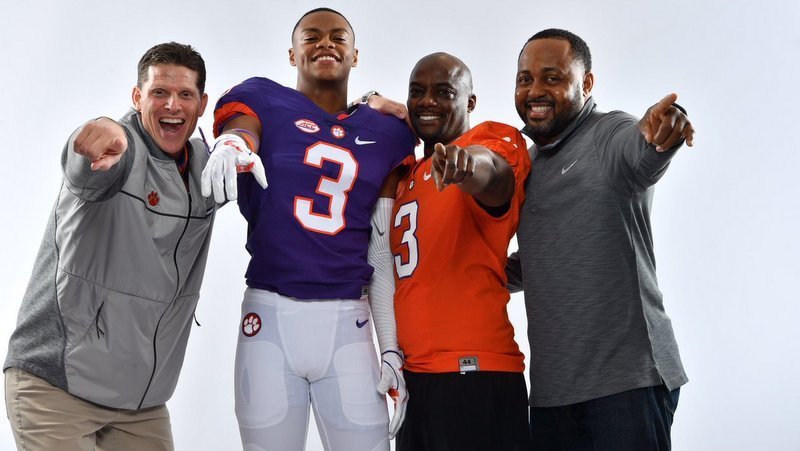 Mario Goodrich was a late add to Clemson's recruiting class

In the words of today’s youth, Clemson’s 2018 recruiting class is “ridiculous.” I would call it historic.

The Clemson coaching staff added two more prospects to its heralded 2018 class Wednesday with the addition of wide receiver Justyn Ross and defensive back Mario Goodrich. The class is smaller in number (17) that most schools across the country, but the coaches still managed to sign a top-10 class according to most scouting services.

ESPN ratings – which aren’t dependent on selling subscriptions to the sites of the more successful programs – ranked the Clemson class as number five in the nation. Clemson’s 17 commits are the smallest in the recruiting rankings until you get all the way to No. 38 Stanford, which signed just 14 players.

Clemson signed 12 players in the ESPN300, and signed six 5-star players according to Rivals, which has Clemson’s class ranked eighth. The 247 recruiting rankings have Clemson’s class ranked sixth nationally. Those are all great numbers considering the small class size – if you were to give the Tigers a few more players with the average rating, this class would easily be in the top five in all of the recruiting rankings.

But this class is about much more than just the rankings. The average number of stars are great to be sure. But this class landed as much talent PER PLAYER as any other school in the country, and they’re going to a school that has a track record of developing players.

Signing 5-star Xavier Thomas and 5-star wide receiver Derion Kendrick showed Clemson’s muscle in the state of South Carolina, despite the fact that Thomas spent his last year at IMG in Florida. Clemson dipped into Georgia for a game-changer at quarterback, signing 5-star quarterback Trevor Lawrence.

The coaches went into Ohio and beat out Ohio St. and USC for 5-star offensive tackle Jackson Carman. The addition of 5-star defensive end K.J. Henry gave the Tigers four prospects in the top-25 nationally. In fact, Clemson might have signed the nation’s best defensive line class when you add in Josh Belk, Justin Mascoll, and Darnell Jefferies. ESPN300 safety Kyler McMichael, ESPN300 cornerback Mario Goodrich and ESPN300 running back Lyn-J Dixon are all valuable pieces to the puzzle.

Linebacker Jake Venables and tight end Braden Galloway are players that were brought in because of what they bring to the table – Venables is smart and instinctive while Galloway has as much athletic talent as anyone on the board. And don’t sleep on walk-on Ben Batson, who has played quarterback but is athletic enough to find a home at safety. Offensive lineman Jordan McFadden’s best days are ahead of him.

The coaches closed out the day by landing Ross, the first top-rated player to get out of the state of Alabama since Jameis Winston signed with Florida St. in 2012. With the addition of Ross, Clemson signed the top-ranked player from six different states: Georgia, Florida, Ohio, North Carolina, South Carolina and Alabama.

But here’s the scary part – Clemson landed all of these players, players who can make an impact this season – and they didn’t need them to have the type of team that can contend for a national title next season.

The Tigers return quarterback Kelly Bryant, who is being mentioned in the early Heisman conversation, and added Lawrence to a group that already includes LAST YEAR’S No. 1 signal caller in Hunter Johnson.

Clemson returns the best defensive line in college football – it’s not close – and adds what might be the best class in the country on the defensive front. That includes the No. 1 and No. 3 defensive ends. This cast of characters joins a team that returns 15 starters from the team that made the College Football Playoff a year ago.

Cycling out? No. Ridiculous? Yes.