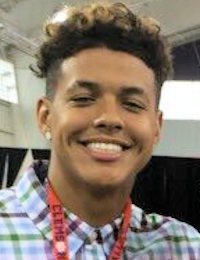 Tight End
B I O
All-around athlete who played tight end and quarterback for nearby Seneca High School…. comes to Clemson from the same high school that produced former Clemson All-American and Pittsburgh Steelers great Bennie Cunningham..…two-sport athlete at Seneca…did not start playing football until 2016, his junior year…finished that year with 50 catches for 834 yards and nine scores….played quarterback at start of his senior year (2017) and had 107 yards rushing, 102 yards passing, 22 yards receiving and three touchdowns against Chapman in first game…but in second game of the year suffered a foot injury that forced him to miss six weeks…came back at midseason and threw for 181 yards and two scores, but felt pain in the foot the next week and did not play the rest of the season…. outstanding player on the hardwood, he was the Region I-AAA Player of the Year in basketball in 2016-17….averaged 20.1 points and 8.1 rebounds as a junior….averaged 15.9 points a game as a sophomore…made 100 three-point goals over his sophomore and junior seasons… ranked as the #1 overall TE in the state of South Carolina by Scout.com…ranked as 13th best player in South Carolina by Rivals.com and 247 Sports… played football at Seneca High for Hal Capps…committed to the Tigers on 04/08/2017…recruited by Brent Venables and Danny Pearman.