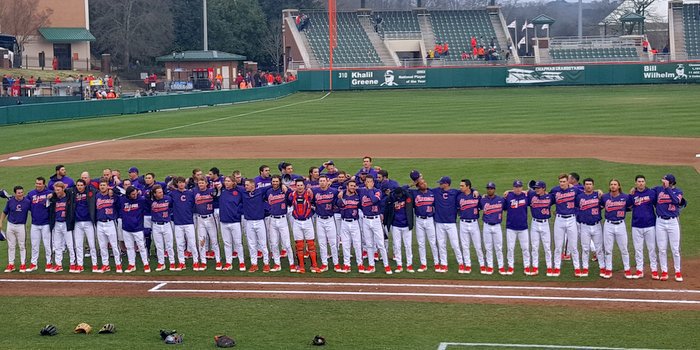 Clemson players celebrate the first win of the Lee era

Seth Beer and Alex Renwick each drove in two runs and Clemson scored five runs in the second and four in the third in defeating Maine 9-4 at Doug Kingsmore Stadium Saturday afternoon. The win is the first for Lee, who was named the Tigers’ skipper last summer.

Krall came on in the sixth in relief of Schmidt and gave up just one hit while striking out six. In all, Clemson's pitchers struck out 12 while walking just two.

Schmidt blanked the Black Bears through the first two innings and Clemson put a five spot on the board in the bottom of the second. Maine starter Chris Murphy battled control issues and plunked Chris Williams to begin the frame. Weston Wilson and Robert Jolly each walked to load bases and Williams scored on a Murphy balk.

Adam Renwick battled back from a 0-2 hole to double down the left-field line for a 3-0 lead, ending Murphy’s day. Murphy faced nine batters, walked four, hit two and gave up four runs while throwing just 15 of 40 pitches for strikes.

Renwick scored on a RBI groundout by Chase Pinder, but the Tigers weren’t done with the damage. Eli White walked, stole second and scored on Reed Rohlman’s RBI double to right for a 5-0 lead.

Clemson players celebrate the first win of the Lee era"

The Black Bears came out of hibernation to score a single run against Schmidt in the third, but the Tigers added to the score in the bottom of the inning. Wilson singled to start the inning, but two quick outs threatened to quell the rally. Pinder singled past short to advance Wilson to second, and White singled through the left side to score Wilson for a 6-1 lead.

The Tigers eventually loaded the bases for Chris Okey, who drew a bases loaded walk for a 7-1 Clemson advantage. The freshman Beer promptly line a two-run single to left-center for a 9-1 lead at the end of three innings.

Schmidt ran into trouble in the fifth and sixth, giving up three runs, but Beer slipped in right field on a catchable ball that could have limited the damage. Schmidt, in his first start since his cancer scare, gave up four earned runs in his five innings of work, walking one and striking out five. He threw 53 of his 77 pitches for strikes.

The Black Bears added another run in the sixth to make it 9-4.

The rubber match of the series will be Sunday afternoon at 1 p.m. Maine righty Jeff Gelinas will face Clemson lefty Jake Higginbotham.

Clemson vs Maine Boxscore
Get the latest Clemson gear right here!
Comment on this story