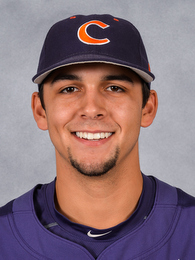 Before Clemson: Received All-America honors ... state player-of-the-year as a senior ... state All-Star Game selection ... all-district and all-region as a sophomore ... all-district as a freshman ... No. 331 player and No. 70 outfielder in the nation and No. 11 player in Virginia by Perfect Game ... member of the state championship football team as a freshman ... lettered four times in baseball and two times in football at Poquoson High School, where he was coached by Kenny Bennett.

Personal: His father, Chris, played baseball at Florida State and Virginia Commonwealth ... his brother, Chad, played baseball at Virginia Tech and made his major league debut with the Oakland Athletics in 2016 ... majoring in sports communication ... born Chase Alexander Pinder on March 16, 1996 in Poquoson, Va.