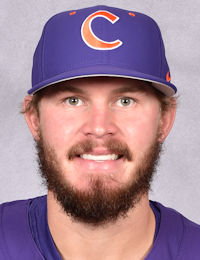 1st Base
B I O
Sophomore who burst onto the scene as one of the best players in the nation in 2016 after what should have been his senior year of high school; graduated high school a semester early to enroll at Clemson in January 2016 ... slated to play at first base in 2017 ... first in Tiger history in walks per at-bat (one every 3.27), second in slugging percentage (.700) and ninth in batting average (.369).