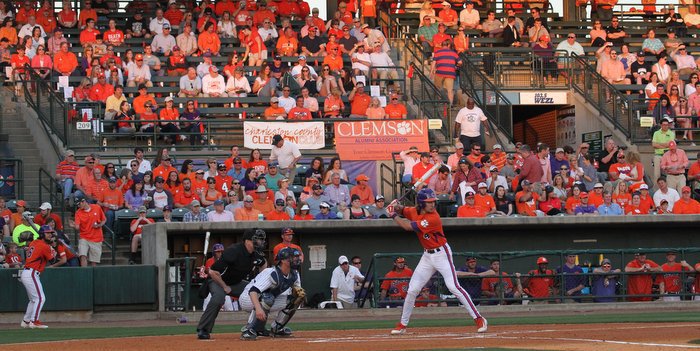 CHARLESTON – Clemson made sure their bats made the trek to Charleston.

Andrew Cox hit a three-run homer and Weston Wilson continued his torrid week by driving in four runs as No. 19 Clemson defeated The Citadel 12-1 in the first game of a two-game series in front of 5,524 fans at Joseph P. Riley Park in Charleston Tuesday evening.

"It's always our goal to win in the middle of the week. At the end of the year whether you get in the tournament or not depends on how well you did in the middle of the week," head coach Monte Lee said. "I think it jut shows our guys understand you have to have focus and show up and play good baseball every day. We know going on the road and playing in a big ballpark we would be tested, but scoring early helped us. We scored a couple of runs in the first and we were able to put some quality at-bats together and score some runs and play a good game."

It didn’t take the Tigers long to get on the board. Chase Pinder led off the game with a walk and moved to second on a one-out walk by Chris Okey. Freshman sensation Seth Beer doubled to score Pinder and a sacrifice fly by Wilson plated Okey for a 2-0 lead.

Reed Rohlman doubled to lead off the third inning and advanced to third on an infield single by Okey. Okey advanced to second on a wild pitch and both runners scored on a single by Wilson that made it 4-0 Tigers. 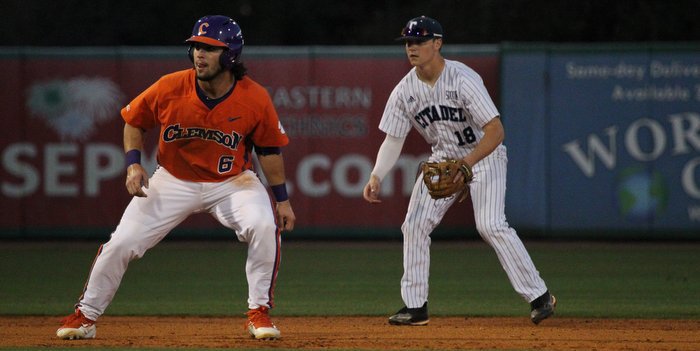 The Tigers would bat around and put the game out of reach in the fifth. Rohlman hit a fly to right that was dropped by the right fielder, and he wound up at third. Okey singled up the middle to score Rohlman for a 5-0 lead, and Okey moved to second after Beer lined a single to left.

Wilson doubled into the gap in left-center to score Okey and Beer moved to third on the play. Eli White struck out, but Cox drilled a 3-run homer to right for a 9-0 lead. The homer was the first for Cox in his career. Adam Renwick walked later in the inning, and he scored on a double by Pinder that fell on the warning track in left-center.

Lee began to empty the benches at that point, but the Tigers weren’t done scoring. Chris Williams singled to lead off the eighth inning and he moved to second after Robert Jolly walked. White drilled a double down the left field line that scored Williams, and Glenn Batson’s sacrifice fly scored Jolly for a 12-0 lead.

Jake Higginbotham picked up the win, going five strong innings. He gave up four hits and walked four but struck out eight and didn’t allow an extra-base hit in his 95 pitches.

"I thought we played really, really well. It was great to see Jake Higginbotham give us a good start, and bullpen-wise we were able to throw a lot of guys, which was our goal," Lee said. "I thought Paul Campbell threw very well and it was good to get the old man Patrick Andrews out on the mound for his first appearance of the year. I thought we threw the ball very well. We made some good plays defensively and we swung the bats really well. I thought we played a complete game tonight."

The Bulldogs broke through in the bottom of the eighth. A walk, a hit batter and a sacrifice fly scored the run against relief pitcher Riley Gilliam.

Lee said his Tigers are playing with confidence but also understand it's a long season.

"I think they are very confident, but the big thing is we have to show up every day, be consistent, be loose, have fun and understand how to play the game," he said. "I think our guys have bought into that. But we all know it's a long season, there are a lot of areas we have to get better at, and there are still a lot of things we can do better. We understand it's a long season and we are gonna have some bumps in the road and won't play well but we have to show up every day. But we're off to a good start and hopefully we can continue to play good baseball."

The second game of the series will be Wednesday at 6 p.m.