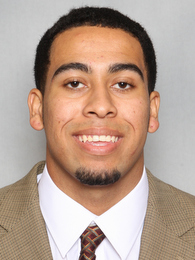 Tight End
B I O
One of the nation’s best tight ends, and the most decorated athlete to play the position at Clemson ... two-time Mackey Award finalist ... finished his career with 112 receptions for 1,598 yards and 18 touchdowns in 2,372 snaps over 51 games (38 starts) ... Clemson's career leader in receptions, receiving yards and receiving touchdowns by a tight end.

2016: Finalist for the John Mackey Award ... second-team All-American by AFCA and CBS Sports ... third-team All-American by Phil Steele ... first-team All-ACC (media) ... produced 46 receptions for 736 yards and seven touchdowns in 954 snaps in 15 games (15 starts) ... set Clemson single-season record for receiving yardage by a tight end in the ACC Championship Game ... posted four catches for 31 yards, including a nine-yard touchdown catch, in win at Georgia Tech ... hauled in 31-yard touchdown against Louisville that proved to be the deciding score for the Tigers against the Cardinals ... also had a two-point conversion that followed the touchdown ... scored 56-yard touchdown on a catch and run at Boston College ... had five grabs for 56 yards in win over NC State ... ACC Wide Receiver of the Week and offensive player of the game by coaches against Florida State, when he scored the game-winning touchdown with just over two minutes left ... posted 122 receiving yards, a tight end record at Clemson, in the win over the Seminoles ... posted six catches for 95 yards against Pittsburgh ... had three catches for 58 yards and a touchdown in rivalry win over South Carolina ... posted four catches for 49 yards and two touchdowns against Virginia Tech ... came up big in the National Championship win over Alabama with seven grabs for 95 yards, including a critical 17-yard reception in the redzone that helped set up the go-ahead touchdown with one second left in the game.

2015: One of three finalists for the John Mackey Award, presented annually to the nation’s top tight end ... second-team All-American by the Walter Camp Foundation ... honorable mention All-American according to Sports Illustrated ... first-team All-ACC (coaches) ... second-team All-ACC (media) ... third on the team with 40 catches for 525 yards and eight touchdowns in 892 snaps over 15 starts ... his eight touchdowns were most on the team ... 34 of his 40 catches went for first downs ... had three catches for 29 yards in win over Appalachian State ... first Tiger tight end with a touchdown reception in five consecutive games ... caught first touchdown of the season at Louisville, a 25-yard strike from Deshaun Watson on a trick formation ... followed with six-yard touchdown catch to open the scoring in win over Notre Dame ... named co-offensive player-of-the-game by the coaches ... continued his fine play with a third straight game posting at least one touchdown with two in win over Georgia Tech ... named player-of-the-game offensively after four-catch performance ... caught six-yard touchdown pass against Boston College ... scored on a 34-yard pass from Watson at Miami to break the school record ... posted career highs with six catches and 101 yards against Florida State ... had four catches for 73 yards at South Carolina, several of which converted third downs ... caught seventh touchdown of the year in the first half with two seconds remaining against North Carolina, helping Tigers to the ACC Championship ... notched his eighth touchdown reception against Alabama in the National Championship Game to tie Dwayne Allen (2011) and Brandon Ford (2012) for the school single-season record by a tight end.