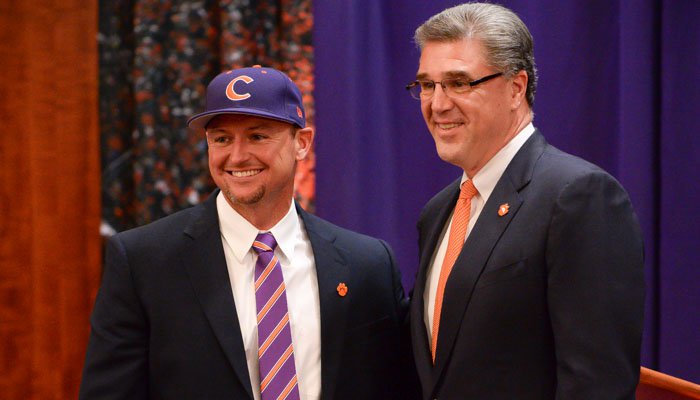 We are eight days away from opening the Monte Lee era in Clemson baseball, but I warn fans not to expect too much too soon. There is a reason there was a change at the top, and Lee is here to fix what is broken.

Lee doesn't have the luxury of stepping into a loaded program at his point. There is rebuilding to do, but I am excited about his program and the energy he has provided for the future.

The cupboard is not completely bare. Behind the plate, Clemson has perhaps the nation's top catcher in Chris Okey. The junior hit .315 with 16 doubles, 12 homers, and 57 RBIs in 61 games last season.

At shortstop Eli White returns after a very good sophomore season where he hit .297 with 44 runs and 11 steals. Weston Wilson moves from third base to second base to help with his defense, but his power bat produced five home runs and 26 RBIs a season ago. Taking Wilson's third base spot is Adam Renwick, who impressed in the fall.

Lee said first base is his biggest concern. Reed Rohlman, Glenn Batson, Chris Williams and Drew Wharton were the early candidates. All four players can play other positions if they don't win the starting spot at first. Rohlman was a third-team All-American after hitting .356 as a freshman. He also led the team in hits, doubles, and RBIs. Look for Rohlman at first, left field or DH this season with his bat in the middle of the lineup. Wharton showed promise as a freshman last season and could play left or first. Williams came in as a catcher candidate if first base doesn't work out, but Robert Jolly may be the backup catcher when he doesn't DH. The point is Lee has options at first base.

Speaking of position moves, Chase Pinder moves from second base to centerfield after hitting .256 last season, but his shoulder injury was a concern.

Clemson gets a boost from a true freshman who arrived in January. Seth Beer was rated number two in the country according to one website. He can play first base or a corner outfield spot in making the jump from high school to college.

The Tigers will need to have major production on offense this season because the biggest question mark comes from the pitching staff. Experience is a huge factor as Clemson has only eight wins returning from last season.

Clate Schmidt is the most experienced pitcher, but the right-hander is coming off of a bigger battle as he is cancer free from his bout with lymphoma. Other starting candidates include left handlers Charlie Barnes and true freshman Jake Higginbotham. Brooks Crawford and Alex Eubanks are two other freshmen that are competing for starting positions.

Most programs are unsure of the roles of their pitching staffs this time of year, but the Tigers haven't been this inexperienced in recent years and question marks remain throughout each role.

One thing that hasn't changed is the difficult schedule. Clemson faces second-ranked Louisville, sixth-ranked Miami, tenth-ranked NC State, 17th-ranked South Carolina and 20th-ranked Florida State. Clemson is picked to finish fifth in the ACC's Atlantic Division in this rebuilding year, but at least, there is new energy in the program with Lee taking over.