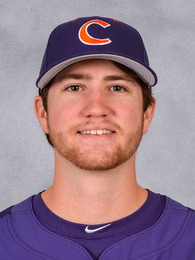 Before Clemson: State pitcher-of-the-year as a senior ... Perfect Game First-Team All-Atlantic selection ... all-state as a junior and senior ... led his team to the state championship as a freshman and senior ... No. 2 player and No. 1 lefthander in South Carolina by Diamond Prospects ... No. 65 lefthander in the nation and No. 10 player in South Carolina by Perfect Game ... played in the East Coast Pro Showcase ... South Carolina Select Team member ... lettered three times in baseball at Sumter High School, where he was coached by Brooks Shumake.