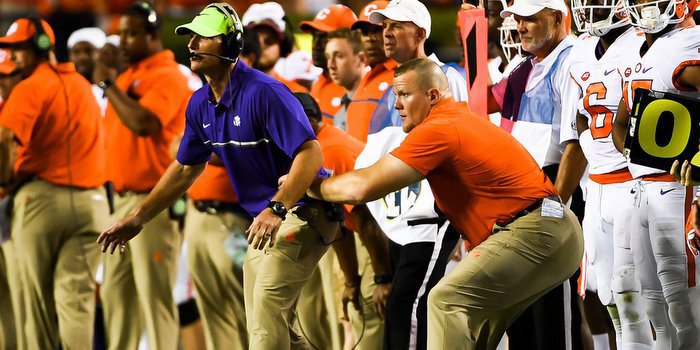 Some can argue that C.J. Spiller was Dabo Swinney's most important recruit. I can see that because of how brilliant his career was and without Spiller does Clemson sign Sammy Watkins?

I can make a great argument that Deshaun Watson is his biggest recruit. Does Watson bring the Heisman to Clemson? Does Watson bring a national title in 2016? We know he has helped Clemson to back-to-back ACC titles and two College Football Playoff appearances, but would Watson be here without Dabo's recruiting of Chad Morris away from Tulsa and its head coaching position?

Sure Dabo has signed a bunch of great coaches and great players since arriving here, but perhaps his biggest was stealing Brent Venables from Oklahoma. Dabo pulled Venables away from a place where had been 13 years and where he could have stayed as long as he wanted.

Yesterday Venables was finally honored with an award he should have won years ago, the Frank Broyles Award that goes to the nation's best assistant coach.

When I think of Venables, I think of I think of four attributes that make him perhaps the finest Clemson assistant coach of all-time. First, Venables coaches with a tremendous amount of passion. Millions have seen him being pulled back on the sidelines by the assistant strength and conditioning coach. This isn't a game day attitude for Venables, this is a 365-day-a-year way of life.

The second aspect and perhaps the most overlooked is Venables as a linebacker coach. He gets a lot of credit for being a great coordinator, but go back and look at the way his linebackers play and consider the way he develops players at the position he coaches. He has coached four Butkus Award finalists including two that won the award.

Third is the obvious talent he has shown as the coordinator. His defenses are consistently having to replace talent that advances to the NFL, but his defenses rarely take a step backward. No matter how inexperienced his players have been at times, they always seem to perform as one of the best defenses in college football.

Finally, I am amazed at Venables' recruiting. Often head coaches hire young assistant coaches to recruit and more experienced coaches as coordinators. We often see high paid, high profile coordinators tire of the recruiting process and spend less time on the road and more time diving into schemes. Venables is highly competitive, and it shows on the recruiting trail. Some would be surprised to find Venables may be the best recruiter on a staff of terrific recruiters.

In the end its all about results. Venables has been an assistant for 21 seasons at Kansas State, Oklahoma, and Clemson. His teams have a 228-49 record. At Clemson he is 58-9. Venables' teams have won at least ten games in 17 of 21 seasons. This year will be his fifth Fiesta Bowl. He has coached in four Orange Bowls, two Cotton Bowls, and a Sugar Bowl. He was won one National title and played for another.

Yesterday was a great day for Brent Venables. The Broyles Award recognizes this year what many Clemson fans have known for the past five years.