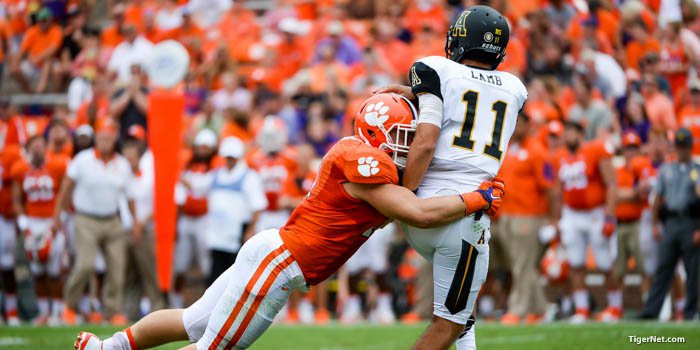 We learned a little more about this Clemson team Saturday, but bigger test await.

Saturday was part two of the pre-conference schedule for the Tigers, and while this one was a little tougher, Clemson passed the test with flying colors.

Defense was the story in the 41-10 win over Appalachian State Saturday. The Tigers' D scored on a Carlos Watkins

Carlos Watkins
RS Jr. Defensive Tackle
#94 6-3, 296
Mooresboro, NC
View Full Profile pick-six on a beautiful zone blitz to set the tone for the win. The defense forced four turnovers and ten three and outs. The Tigers also had 11 tackles for losses in the dominating performance.

Deshaun Watson
So. Quarterback
#4 6-2, 207
Gainesville, GA
View Full Profile and crew got everything on track, and finally the second unit and reserves struggled in the second half.

The special teams were a mixed bag. Ray Ray McCloud had a nice 73-yard kick-off return, but the Tigers kick-off coverage was suspect as well. Andy Teasdall

Penalties were an issue as the Tigers had nine penalties for 75 yards and the bad snap in the shotgun showed up again. And the offensive line was not nearly as dominant as they were in week one.

However, there were still some bright spots offensively. Wayne Gallman

Charone Peake
Gr. Wide Receiver
#19 6-2, 214
Moore, SC
View Full Profile emerged with some big plays at wide receiver. Watson settled into the game at quarterback and looked like his old self in the second quarter.

Jayron Kearse
Jr. Safety
#1 6-4, 224
Fort Myers, FL
View Full Profile that led the big-play defense. The Tigers flipped the field with the four turnovers and gave the offense the ball in great field position during the 28-point second quarter.

Much like the season opener against Wofford, Clemson was able to play a ton of players Saturday. This time the second and third units had issues.

The pre-conference segment of the schedule is complete. Clemson looked very dominating as it should against these two programs. Mike Williams

I like where this team is heading into Thursday night's game at Louisville. I hope I like where it is heading into an off-week starting Friday. The Louisville game looks less intimidating after the Cardinals fell to 0-2 with a home loss to Houston. Clemson enters the game as a five-point favorite.