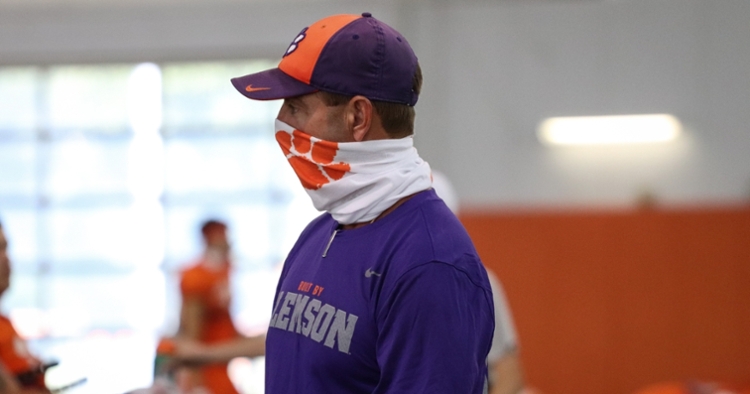 Clemson coach Dabo Swinney was a guest on ESPNU Radio on Tuesday to talk about a season in the balance due to the COVID-19 pandemic and the decisions being made by Power 5 commissioners.

Swinney says Clemson has a unified front from its athletic wing to its academic administrators.

"We’re very fortunate because we have such a great alignment here, starting with our president -- even our board, our board is amazing," Swinney said on ESPNU Radio. "President Jim Clements is awesome, in every regard. We just have great communication and Dan Radakovich, our AD. I’ve been around a long time and it isn’t always that way everywhere. We have a great alignment here, and even sometimes we may not always agree, we just have such great respect for each. But in this regard, we are all on the same page. One hundred percent. President Clements is very much for us being here and us trying to play a season.”

Swinney says he has been active in having his voice in the process. With other leagues wavering on postponement or playing, the ACC is currently "moving forward" with football per reports, with teams practicing and games scheduled to start as soon as Sept. 10. The league's presidents are set to meet on Wednesday again, per multiple reports.

“I told my kids I’m going to lobby for my first grandkid to be named Zoom Swinney, and if not, I’m going to get another dog and name him Zoom," Swinney said of the video call service. "I’ve lost so much time in my life since March on the phone -- it’s just crazy. I’ve been on a lot of calls with coaches every week -- sometimes twice a week. I’ve been on a couple committee things along the way. I’ve had a lot of opportunities to express myself and certainly communicate with Dan Radakovich and even president Clements regularly...I certainly have an opinion. Doesn’t mean I’m right or I’m wrong."

Swinney reiterated what he told local media on Monday about players being safer in school than otherwise.

"We do not want what we had from March to July," Swinney said. "That was terrible for our student-athletes. Terrible. It was terrible for their mental health and it was terrible for their nutrition. To be quite honest with you, they are way safer now than then...They go home and they're not being tested twice a week. They are going to be tested twice a week (here). They have medical care. If we do have to quarantine someone, they're taken care of...Again if someone would tell me that we cancel college football and the virus goes away -- hey, I'm the first guy, sign me up for that, but that's just not reality."