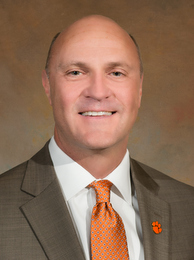 B I O
James P. Clements became Clemson University’s 15th president on December 31, 2013. He is also a Professor in the School of Computing, College of Engineering and Science at Clemson.

Under his leadership, Clemson has reached several milestones — the largest campus development initiative the University has seen since the mid-1960s; a record number of student applications with the strongest academic profile in University history; and a record-breaking year in fundraising, with nearly $170 million raised in private gifts since Clements joined the University.

Clements is a nationally recognized leader in higher education who currently serves as Chair of the Board of Directors for the Association of Public and Land-Grant Universities, North America’s oldest higher education association. Annually, APLU’s 235 member institutions enroll 4.7 million undergraduates and 1.3 million graduate students, award 1.1 million degrees and conduct $41 billion in university-based research. He also represents APLU as a member of the American Council on Education (ACE) board and serves on the executive committee of the APLU’s Commission on Innovation, Competitiveness and Economic Prosperity.

Clements is also Chair of the ACE Commission on Leadership; co-chairs the U.S. Department of Commerce’s National Advisory Council on Innovation and Entrepreneurship (NACIE); is a member of the Business Higher Education Forum; serves as academic co-chair of the Automotive Sector of the Council on Competitiveness-Energy and Manufacturing Competitiveness Partnership (EMCP); and is national co-chair of APLU’s Energy Forum. He previously served on the U.S. Commerce Department’s Innovation Advisory Board, where he was the only university president in the country to serve in that role.

He holds a B.S. in Computer Science and an M.S. and Ph.D. in Operations Analysis from the University of Maryland Baltimore County, as well as an M.S. in Computer Science from Johns Hopkins University. He has published and/or presented more than 75 papers in the fields of computer science, higher education, information technology, project management and strategic planning. He also served as principal investigator or co-PI on more than $15 million in research grants. Before he came to Clemson, Clements served as the president of West Virginia University for nearly five years.

Prior to his service at WVU, Clements served as Provost and Vice President for Academic Affairs, Vice President for Economic and Community Outreach, and the Robert W. Deutsch Distinguished Professor of Information Technology at Towson University, the second largest university in the University System of Maryland, where he was a four-time winner of the Faculty Member of the Year Award, given by Towson students. He also led the Center for Applied Information Technology, which was a strategic, entrepreneurial initiative for the university, chaired Towson’s Department of Computer and Information Sciences, and was a consultant to numerous private-sector companies. His Successful Project Management book is now in its 6th edition and is published in multiple languages and used in numerous countries.

Clements and his wife, Beth, have four children — Ty, Hannah, Maggie and Grace.

Last night, MfOjr. had a scrimmage, 9-10 year olds. After