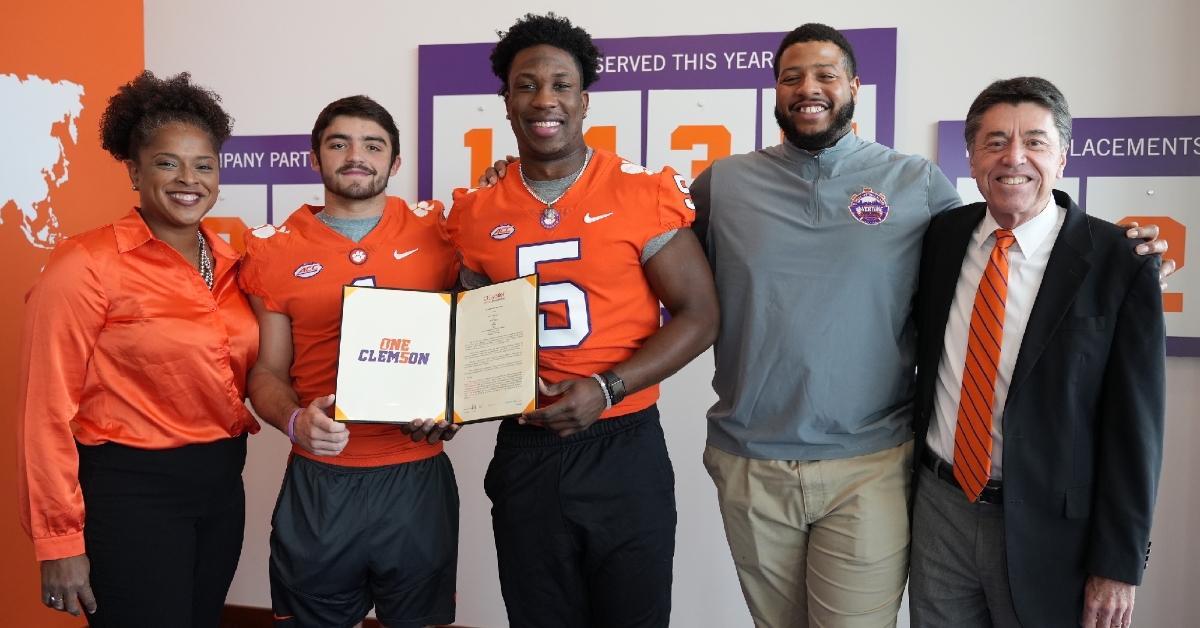 CLEMSON, S.C. — Clemson defensive end K.J. Henry and running back Will Shipley, in coordination with P.A.W. Journey/OVERTIME, IPTAY and Clemson University’s Division of Inclusion & Equity, announced today that they have established the “1 CLEM5ON” endowment to help provide resources to Clemson University students, including fellow scholar-athletes.

The historic endowment featuring two active scholar-athletes giving back to the university was formally announced during a television timeout of Clemson’s annual rivalry contest with South Carolina on Saturday after being finalized earlier in the week. For the first five years, the endowment from five-figure donations by Henry and Shipley will benefit Clemson University’s Harvey and Lucinda Gantt Multicultural Center and Clemson Athletics’ “Hear Her Roar” campaign, and every year thereafter will support Clemson’s P.A.W. Journey program.

“This extraordinary commitment by K.J. Henry and Will Shipley to give back to Clemson and support future generations of students is yet another example of their leadership and selflessness,” said Clemson University President Jim Clements. “Just like K.J. and Will, the 1 CLEM5ON endowment is a game-changer, and I couldn’t be more proud of these remarkable young men and the way they represent our University.”

The Gantt Center supports and advocates for the needs of all students, challenges students to think critically about themselves and their communities, provides engaging experiential learning opportunities and empowers students to be positive change agents. Funding from the 1 CLEM5ON endowment will support Clemson University’s stated intent to attract and retain students from diverse backgrounds.

Clemson Athletics and IPTAY launched the Hear Her Roar fundraising campaign in June to raise awareness and financial support specifically for Clemson’s women student-athletes. The fundraising campaign has allowed Clemson to strengthen its commitment to opportunities and access for its 12 NCAA Division I women’s programs and the women that comprise them.

“Will Shipley and K.J. Henry embody everything that is right about intercollegiate athletics and student-athletes in particular,” IPTAY Chief Executive Officer Davis Babb said. “They are leaders in the classroom, on the fields of competition, serving their teammates and fellow students, and now generously sharing their resources to provide opportunities for those that follow them in the future. To my knowledge, these are the first such major gifts from current student-athletes to have ever been made to their schools in this country, and their philanthropy and selflessness speak volumes about the type of young people they are. We are truly blessed to have them at Clemson.”

Since their respective arrivals at Clemson in the recruiting classes of 2018 and 2021, Henry and Shipley have been paragons of the scholar-athlete ideal.

Henry, a three-time ACC Honor Roll selection, earned an undergraduate degree in sports communication in only three years and added a master’s degree in athletic leadership in December 2021. He has continued his postgraduate education in his final year of eligibility at Clemson this season and was a semifinalist for this year’s William V. Campbell Trophy, presented annually to the nation’s top scholar-athlete.

Last year, P.A.W. Journey named Henry as Clemson’s 2021 P.A.T. Man of the Year, the leadership initiative’s highest honor. He completed microinternships with Bunty and Fellowship of Christian Athletes and has been a frequent in-person supporter of other Clemson Athletics squads throughout his Clemson tenure.

“P.A.W. Journey was a big reason why I wanted to come to Clemson — to benefit from this program’s focus on the growth of the man, not just the athlete,” Henry said. “I saw a chance to give that opportunity to students who don’t play sports, students going about their everyday lives, and allow them to receive these same tools that we are equipped with. It seemed like a no-brainer. And then seeing Clemson’s female athletes and how hard they work, as well as seeing the platform that the Clemson Softball launched from beginning with such great backing and support, Will and I wanted to help these new programs coming in as well in the athletes and programs we have here now. We want to raise the bar for all of our student-athletes.

“With Will and I being men of God and men of faith, we know that money is short-term. There is a lot of love we can spread with it with the platform we have, so it is a blessing to be granted with this opportunity to give back to our fellow athletes and students.”

Shipley arrived at Clemson as an instant leader, immediately garnering the respect of players, coaches and the entire university community upon his arrival in January 2021. The second-year management major completed a microinternship at National Football League headquarters last Spring and is a CSC Academic All-District selection and Academic All-America candidate this season with a 4.0 cumulative GPA.

The 1 CLEM5ON initiative further extends Shipley’s philanthropic outreach. Within the last year, he has also raised and donated five figures to a children’s hospital in his home metro area of Charlotte.

“I have been so blessed here at Clemson University to be associated with P.A.W. Journey and everyone involved in it,” Shipley said. “They’ve given me opportunities and tools I’ll be able to carry with me for a lifetime. At an older age, looking back, I’m really going to appreciate the journey and how much I’ve learned throughout my time here.

“I’m just so pumped to have this platform and be able to give back to people that are the reason why I’m here today and give back to other students and student-athletes, including female athletes, to be able to support what they’re doing. It is so important to me to make sure that everyone benefits, and to be able to do that and have that platform means a lot to me.”

Both Henry and Shipley are ambassadors in Clemson’s P.A.W. Journey program, a leadership initiative that holistically develops Clemson Football scholar-athletes through personal growth, life skills and professional development. P.A.W., an acronym for “Passionate About Winning,” encourages football student leaders to maintain a continually competitive posture towards all aspects of the journey of life. This journey prepares each young man to apply their leadership, while also challenging them to seek new victories in their careers, communities and households.

“Once again our young leaders are on the cutting edge of scholar-athlete leadership,” said Jeff Davis, Clemson Assistant Athletic Director of Football Player Relations and P.A.W. Journey founder. “What K.J. Henry and Will Shipley are doing is a small representation of their commitment and bright future. When the impact of NIL is one of the focal points of college athletics, these two leaders are The Example of how empowering our scholar-athletes has immeasurable dividends, from supporting their fellow scholar-athletes’ and students’ endeavors to promoting their love for Clemson University.”

One of P.A.W. Journey’s pillars, OVERTIME, was created to provide personal and professional opportunities for growth and influence for all of Clemson’s football alumni, connecting them to resources as well as to one another. Under the leadership of Director of Former Player Engagement & Development Antoine McClain, OVERTIME helps serve as a liaison between Clemson’s current and former players.

“It says a lot about a person’s leadership when they choose to use their influence to empower their fellow scholar-athletes, peers and students by providing them with necessary resources to be successful,” McClain said. “What K.J. and Will are doing with 1 CLEM5ON exemplifies ‘First-Class Men and World-Class Leaders.’”