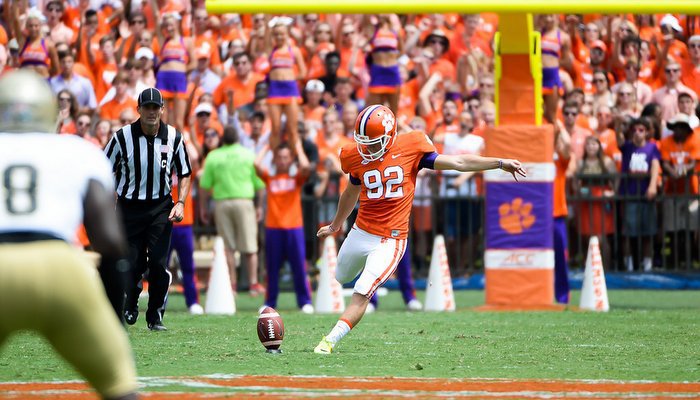 Last week I wrote about four concerns for the 2016 season. Today I wanted to write about Part II of my concerns. Today's blog focuses on kickoff coverage, backup quarterback, defensive end depth and inexperience at linebacker.

This was a huge issue in 2015. The Tigers gave up huge returns in the Louisville, NC State and Alabama games. The Louisville and NC State games were closer than they should have been as a result of the coverage and obviously the Bama game was turned on the long return.

Dabo Swinney has talked about this throughout the spring. He said the staff has studied it over and over again, and they consulted with other staffs on the subject. They spent more time this spring in practice with live kickoffs as well.

The major issue here is the poor kicking aspect of the coverage. Last season Clemson used a couple of kickers, but height and depth were two significant issues. This thing is simple if you had someone who can kick it deep.

I asked former Clemson star Chandler Catanzaro about the differences in schemes in the NFL, and he said they don't have complicated schemes. He says his special teams coach says to blast it out of the end zone. This sounds good, but when you don't have the personnel to do it, then it becomes an issue.

I think if the staff can't find more height and depth with the kickoffs then it is time for higher "pooch" kicks. Giving the opponent the ball at the 32-yard line is not a terrible idea, and it could eliminate the big return.

This subject has to be one of the biggest concerns heading into the season.

Unlike some, I was impressed but the progress of Kelly Bryant. I thought he has taken some major steps. He will never be the passer that Deshaun Watson is, but he can be effective. I thought he made big strides in his mechanics and footwork. His "bad" looking passes have decreased.

This is an issue, and no one wants to see Watson get hurt. However, this is a much smaller issue with me this season. I am starting to gain confidence in Bryant.

Clemson has been very fortunate with great defensive ends in recent years, but this year we have depth and experience issues. The Tigers have six scholarship defensive ends including three sophomores and three freshmen. I think Austin Bryant is ready for the next step. I also feel Richard Yeargin and Clelin Ferrell are about to explode as well. Chris Register has battled injuries early in his career. LaSamuel Davis needs to add size and strength. I think Xavier Kelly can come in and make an instant impact, but he is a true freshman. Talent is here, but depth and experience are concerns. Depth is such a concern that we will see Christian Wilkins there some.

Ben Boulware returns for his senior season, but experience is a factor with the other linebackers. Dorian O'Daniel has not played a lot yet. Korrin Wiggins is coming off of an ACL tear. Kendall Joseph and Jalen Williams played sparingly last season as freshmen. Chad Smith has promise but has yet to play a college down. And Tre Lamar and Shaq Smith are five-star talents but have yet to play in a college game.

I do think the ability is here, but inexperience at a key position can always be a concern.