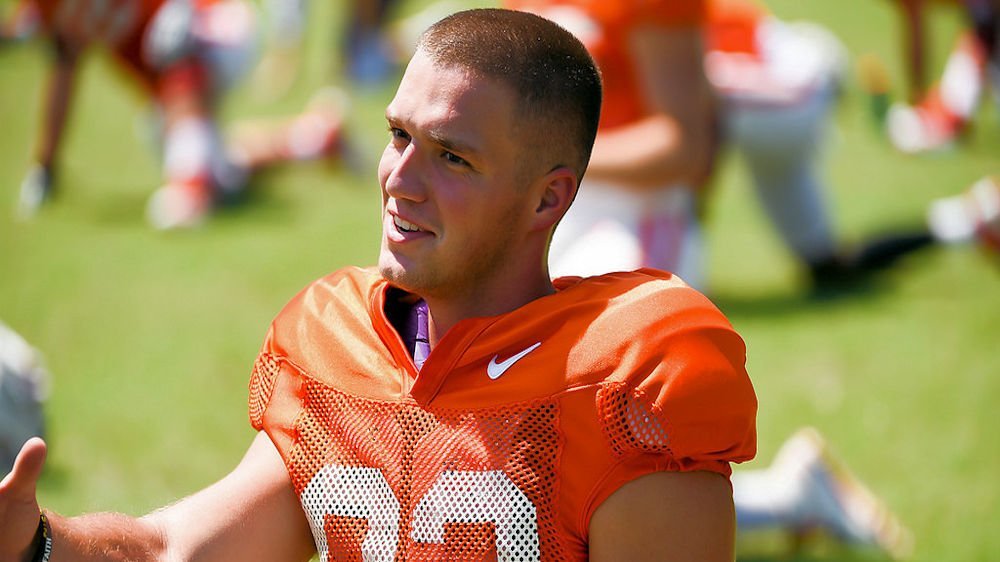 Greg Huegel has emerged on top of a still close kicker battle this camp.

There’s a leader in the clubhouse at a top position battle this Clemson fall camp going into Saturday’s closed, in-stadium scrimmage.

Longtime Clemson assistant Danny Pearman provided his insight Friday into one of the areas he coordinates, special teams, where there’s strong competition across the board.

“I’ve been fortunate enough to be here for 10 years," Pearman said. "And as far as specialists go, this is probably the most competitive group that we’ve had. There’s three good punters vying for a job. There’s competition at kicker. Hopefully that will shake out and we’ll be able to play the guy who gives us the best opportunity to win.”

At kicker, that guy is redshirt senior Greg Huegel at the moment - less than a year removed from a torn ACL in practice, but it’s still anyone’s game there with senior Alex Spence and freshman BT Potter.

“I think it's real intense," Pearman said. "It goes each day. One kid will have a good day. It's like all of the other positions. It's been kinda interesting. There's not a runaway favorite that nobody out there is catching. Each one of these guys have shined at some point so far in the first week of camp."

"From a percentage standpoint, (Huegel's) made more. Alex and BT are right there with him."

Huegel, who earned second-team All-ACC honors in Clemson’s 2016 championship season, told TigerNet Friday he’s feeling back to his old self pre-injury - and Pearman says that mentality is important.

“It’s about getting back in the rhythm,” Pearman said. “He was a confident kid before he got hurt. Getting that back and getting that confidence back in him (is key).”

Elsewhere on special teams, Pearman says they are looking at a number of options in the return game.

On kickoffs, a trio of running backs are working there in Travis Etienne, Adam Choice and Tavien Feaster, as well as receivers Amari Rodgers, Cornell Powell and Derion Kendrick and defensive back Mark Fields. On punt returns, Rodgers is out-front of a group also including Fields, K’Von Wallace, Hunter Renfrow and Will Swinney.

“(Saturday) is our big day to go out and see," Pearman said regarding punt returns. "Right now it's just been practice and getting the schematic part down that you can build toward a scrimmage. We don't get a preseason game...We've got to put them out there and see what happens. Right now (Rodgers) would be the first one who would go out there.”

Pearman: BT is a smooth customer. That ball jumps off that foot. I like what I see with him. He’s a confident kid. He’s aware of his ability and he’s ready to do it. I like him. He’s a good kid and a good kid to have on our team and we’re excited to see what he can do.

Pearman: From our standpoint, we're going to kick the ball and cover the ball. It will be up to them to decide whether to fair catch it or not. I think you have to cover it like you cover a punt. A guy fair catches it and you have to react accordingly.

For us (on returns), our mindset is to bring the ball out, especially if we've got a good returner. And then depending on the kicker each week - fluctuating - maybe it's a guy that can hang it up there extremely high and maybe your mindset will change. Now going into it, we're definitely thinking of the return mode.

Defenders to watch on special teams

Pearman: I'd say (Baylon) Spector would be a great kid to look out for. Tre Lamar is another kid who has embraced that. (Isaiah) Simmons is out there on a lot of them. Those are kids who are a nucleus (there). (Logan) Rudolph is another kid who has jumped out there on several (phases). You've still got Chad Smith and (James Skalski). That's kinda your nucleus guys and then you go from there.

Pearman: He originally came to us as a punter...He's one of the few kids that's a combo kid. He kicks off too. He punts as well as does field goals. He holds as well. For us, he's probably been the first combo guy we've had to since maybe Bradley Pinion. He does all those jobs and does most of them pretty well. (At 240 pounds), he looks a little bit like Pinion - he's a nice young man who's done a nice job for us.

Pearman: I think they all have their strengths and weaknesses. And they all four have done pretty well. It’s hard to say when you’re working against each other. It’s like looking out there at our offense and defense. You say, man, which sideline would you rather stand on? It’s hard to tell when you’re competing against yourself...For the most part, I’m excited about all four.

Derion Kendrick as a returner

Pearman: Kendrick is dynamic. You throw a bubble-screen to him and he takes it to the house. You say, you might want him on punt returns. He has that ability.