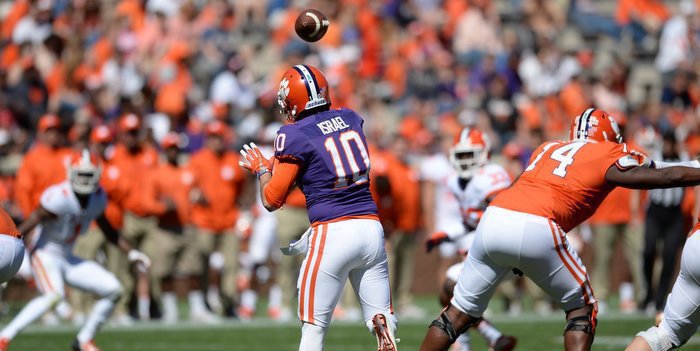 Israel was one of the standouts in last year's spring game

Tucker Israel had one main goal when he arrived at Clemson, and that goal didn’t center around playing football. It was about getting a degree, and he will accomplish that goal this May when he graduates with a degree in sociology.

With degree in hand, he will then find a school with a Master’s Degree program and look at playing a little football along the way.

Israel, a rising junior from Orlando, Florida, did not play last season after an illness that prevented his participation in summer workouts and fall camp. He appeared in two games during his career, against South Carolina State and Syracuse during the 2016 season, completing all four of his pass attempts for 25 yards.

Monday, he announced his plans to transfer after he graduates.

“I wanted to get a degree. That was my main goal coming out of high school, and one of my goals was to get a degree from Clemson,” Israel told TigerNet. “I hope to do that and graduate and now I hope to find a place where I can continue my education and continue my football career, too. I am mainly worried about academics right now and not so much about football. From a recruiting standpoint, I am not worried too much about that right now. I want to get a Master’s Degree and hopefully play some football and have some fun.”

Once a Tiger, always a Tiger.

“I will always be a Tiger. I will always be thankful to Coach (Dabo) Swinney for giving me an opportunity and molding me into the man I am today,” Israel said. “I have been given so many opportunities during my time here at Clemson, and I am grateful for all of them. I am kind of sad because I have to leave a great culture. I was never scared of the competition - I am focusing on finding a good place to finish my education and then play football.”

Johnson and Lawrence were the number one quarterbacks in the 2017 and 2018 recruiting classes, respectively, and Brice has drawn rave reviews after spending last fall on the scout team. However, Israel said it wasn’t about the competition in the quarterback room.

“It's a fresh start for me,” he said. “It's not really football-related. That didn't really have any effect at all.”

“He’ s been an unbelievable presence, not just in our meeting room but on the practice field. He's kind of that coach on the field for us,” Streeter said of Israel. “He knows this system as good or better than all of them, so that's where his talent is. He can manage the game and he knows exactly what to expect. He knows the big picture. He knows defenses. He knows our system. He hasn't had a whole lot of reps this fall but he's been able to help with the younger and really helping them progress and learn the system. His role this year has been really big for our success, to be honest with you. His demeanor, his presence in our meeting rooms and helping out in practice with the younger guys has really, really helped these guys grow.”

Israel said it was all part of being a good teammate, and when spring practice starts he will be an interested observer of not only the quarterback battle, but all of the position battles.

“I feel like everybody in that room contributed in some way. I am glad I found that role and I embraced it and I think the guys enjoyed me being in that role,” Israel said. “I will be interested in all of the position battles. Whoever plays quarterback will be a guy that has earned it and deserves it. I just want to see guys competing and having fun.”