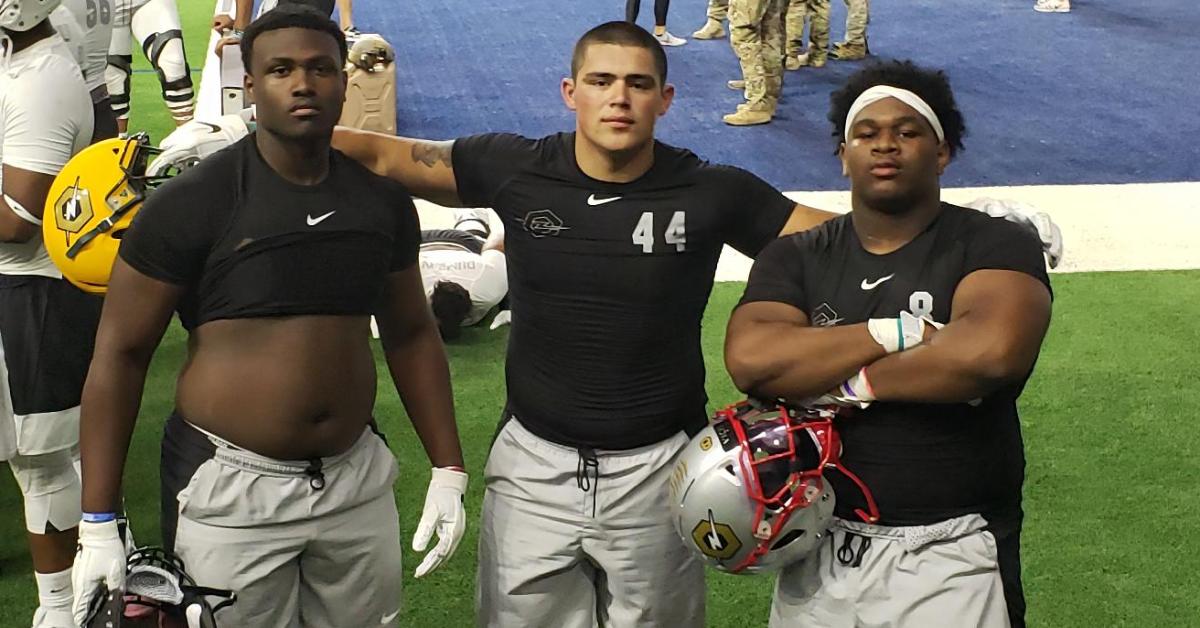 Capehart, Bresee, and Williams (l to r) pose at The Opening Finals

FRISCO, TX – Day one of The Opening Finals is in the books, with Clemson on the mind of everyone.

I’ll start with the defensive line. Demonte Capehart, a defensive tackle out of Hartsville, showed good speed when he ran the 40-yard dash and then turned in a head-turning effort during the 1-on-1’s. It’s really one of the first times I’ve been able to see Capehart in action, and he was much better than I expected.

Capehart brings what one observer called elite length and strength to the tackle spot, and he showed an ability to not only bulrush opposing linemen, he broke out a variety of moves as well. It wasn’t long before his shirt was in tatters, but he kept going, especially with the encouragement of Bresee and Williams. His first step is explosive.

Bresee is exactly what I expected. He blew past one befuddled offensive lineman, leaving Williams’ family exchanging high fives in the stands. Here is the best part of the day for Bresee, however. On one of his second runs, he attempted a spin move that was easily blocked by the offensive lineman. As he walked back to take another turn, one of the coaches pulled him aside for a little coaching.

Bresee responded with one of the best – and fastest – moves of the day as the rest of the defensive lineman jumped and cheered. He told us after that he thinks he can play end on first and second downs and then move inside on third down if he has to. There is no doubting he has the skill for it. 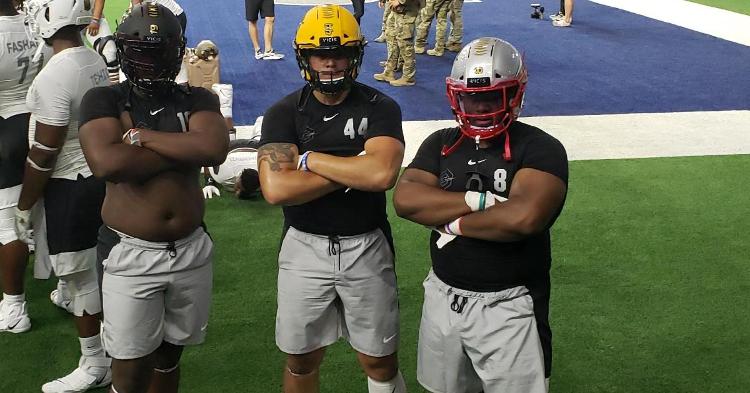 Capehart, Bresee, and Williams (l to r) pose at The Opening Finals "

Williams is another mover and shaker. He spent three days last week at Bresee’s house. Bresee is already showing leadership qualities, and he told us that because they live only 45 minutes apart he wanted to spend time with Williams and get to know his future teammate.

Williams has great hands and looks like he knows how to use leverage to get under a lineman’s pads. There’s no way to tell what a kid will do once they get in college, but it looks like the Clemson coaches hit on all three of them.

Now for the offensive linemen. Parks’ dad played on the offensive line for Kentucky (and played against Clemson in that Peach Bowl in 1993) and the son has a chance to fill out his lean frame. Parks is one of those guys that will benefit from a year in a college weight room and nutrition program, but he’s already strong and has great technique.

He has an ability to move his feet (something hard for younger linemen to learn) and still keep his balance, and he showed plenty of upside during the session.

Mitchell Mayes is another that stood up to the competitive test. Mayes has a great punch and uses his long arms to keep the defender at bay. So often in these types of events, you see the offensive linemen get on their heels – expecting a speed rush – and they get pushed back. Mayes kept his balance all afternoon.

Tchio is long and he has great size. He played left tackle during the session and consistently pushed his defender to the outside. He is able to mix it up – he can use his power to exert his will or he can use technique to keep the defender at bay.

And, I’ll say it again, Bresee is just different.

We will have plenty more early Tuesday morning, but I’ll close with a few tidbits from around the event. I ran into Arkansas head coach Chad Morris, who was sporting a Highland Park shirt and was there to support his son Chandler, a quarterback in the event. Morris and I spoke briefly about Clemson’s ascension into the nation’s elite, and he said he knew when he left that it was about ready to take off. He said he didn’t know that it would be two National Championships in three years good, but he knew Clemson was about to see a run of unprecedented success.

Also taking in the event was former Clemson defensive back Antuan Edwards, who lives in the area and helps local high schools with their workouts. For the record, he still looks like he can play.

As I’ve noticed in year’s past, it’s always interesting to see the reaction when people find out we cover Clemson. There are at least two national writers here that are here to write about Clemson’s ascendance and what makes recruits buy into Dabo Swinney’s message.

One of them asked Bresee about Clemson’s style of recruiting – not offering everybody – and he laughed and said that his DMs (direct messages on Twitter) are filled up with guys who want to commit to Clemson. His message is always the same – sorry, but we are almost full.

Another nice set by @_7msm_2 pic.twitter.com/QBOmHLpj74