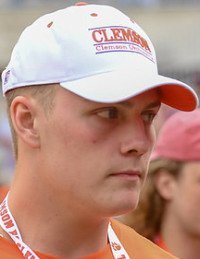 Offensive Line
B I O
First Clemson signee from the state of Kentucky since Justin Miller in 2002 … participated in The Opening in Frisco, Texas in the summer of 2019 … one of six offensive linemen to sign in this class … unanimous top-100 player nationally. Rivals.com ranked Parks as the No. 59 best player in the nation, eighth-best at his position and the No. 2 player in Kentucky … listed as the 63rd-best overall player, eighth-best offensive tackle and best player in Kentucky by PrepStar … ranked as the No. 69 overall player by 247Sports, fifth-best at his position and second-best in the state of Kentucky … ranked as No. 89 overall player in the nation by ESPN.com, the 13th-best offensive tackle and second-best player in Kentucky. Played for Brian Landis at Frederick Douglass High in Lexington, Ky. … did not allow a sack in 15 games as a senior … highest-graded lineman on the team in five of the 15 games and had 75 knockdown blocks … graded over 90 percent from his coaches five times … 5A District Player of the Year … first-team all-state … two-year captain … helped offense record more than 3,500 yards rushing and 1,600 yards passing … on defense, added 32 tackles, including 11.5 tackles for loss with 6.5 sacks. Committed to Clemson on Oct. 2, 2018 … recruited to Clemson by Robbie Caldwell … wore No. 64 in high school … plans to enroll at Clemson in June 2020.