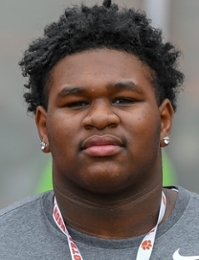 Selected to participate in the Under Armour All-America Game on Jan. 2, 2020 in Orlando, Fla. … participated in The Opening in Frisco, Texas in the summer of 2019 … helped St. John’s College High School go 9-1 in 2018 and rank 20th in the nation (second in the Washington, D.C. area) by MaxPreps … qualified for The Opening national camp last summer and made final top 10 of the lineman event.

Played 2018 and 2019 seasons for Joe Casamento at St. John’s College High in Washington, D.C. … named to the MaxPrep Junior All-American team after the 2018 season … was a MaxPreps first-team preseason All-American for 2019 … helped team to 9-1 record in 2018 and top-20 national rank as a starting defensive tackle.