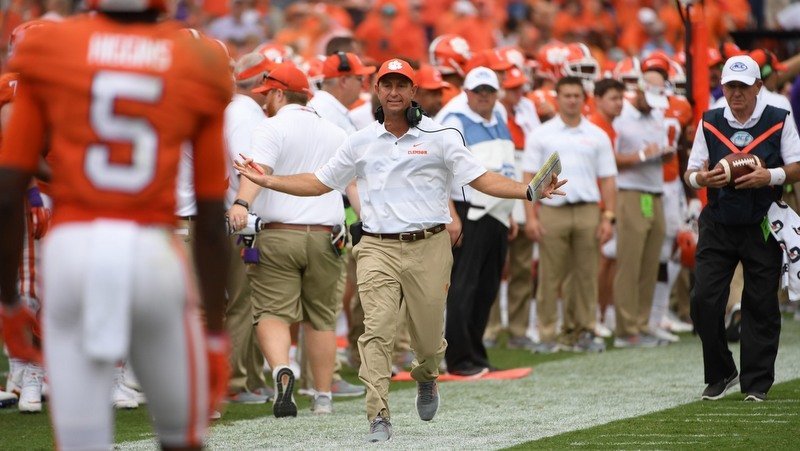 Swinney reacts to a call Saturday afternoon against Georgia Southern

CLEMSON – Second-ranked Clemson walked out of Saturday’s game against Georgia Southern with a 38-7 victory, improving to 3-0 on the season with conference play starting next week. The Tigers rolled up 595 total yards of offense and rushed for over 300 yards, but head coach Dabo Swinney still wants to see more out of his offense.

There was too much chicken left on the bone.

Despite the gaudy offensive numbers the Tigers also had three turnovers, missed two field goals and enough other miscues to keep the offensive coaches busy for a week. That included a series in the second quarter when it took them four plays to punch it in the from the one.

Frustrated with what he was seeing, Swinney made substitutions offensively.

"I was a little frustrated it took four plays to get in the end zone. I just wasn't really happy. So I put the other guys in,” Swinney said. “And they responded. Sometimes you gotta get people's attention and make sure they're hungry. When you're hungry, you don't leave chicken on bone, and we left too much chicken on the bone today."

Co-offensive coordinator Jeff Scott said the second-team and third-team offensive lines might have outperformed the first-teamers.

“I felt like some of the backups did a better job while they were in there,” Scott said. “They might have been a little more hungry. That was good to see. We wanted to challenge those guys in a game with a lot of things going on. It was good to see those guys go execute. The message to those guys is, ‘we are going to need you this year.’ Guys get hurt and it’s a long year and we are going to need them. There shouldn’t be a dropoff and those guys did a good job today when it was their opportunity.”

Scott said the offense still made too many mistakes.

“It was the first time all year we’ve had the turnovers,” Scott said. “We were good in the first two games with no turnovers, but then go down on the first drive and had a good drive going, but that was a drive-killer. I think there were also some opportunities we had where we stumped our toe. I am proud of the way we finished. There were a lot of backups in there when we went down there. You always want to finish strong.”

“There were lots of positives, offensively. Eighteen different guys touched ball for us. Travis Etienne played well; he had a career-high 162 rushing yards,” Swinney said. “All of our running backs did good things. We ran the ball like we needed to. After Kelly Bryant went out with a chest bruise, Trevor Lawrence did a lot of good things, too. He made some big throws, but he missed some throws, too, [ones] that he probably wishes he could have back. Also, Justyn Ross showed everyone that he’s a really special player by getting 103 receiving yards. Again, overall, there were lots of positives on offense.”

Next up for the Tigers is Georgia Tech. The Yellow Jackets lost 24-19 to Pitt Saturday afternoon and will bring a 1-2 record into the game, which is scheduled for 3:30 pm in Bobby Dodd Stadium next weekend. It will be the first conference game for the Tigers.

“We’ve gotten some good, quality experience under our belts in this first quarter of season, which bodes well for us entering conference play,” Swinney said. “We’re going to Atlanta next week, so we have a huge challenge ahead of us. There have been lots of positive takeaways from the first three games, though. We’ve already got nine plays of 40 or more yards this season. Our next goal is to win the division.”