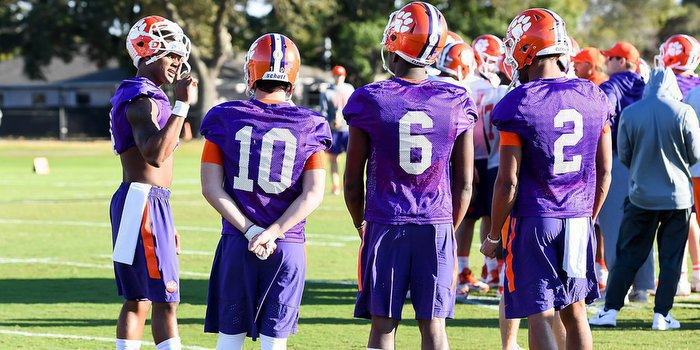 Brandon Streeter has been set as Clemson’s quarterbacks coach since he arrived on campus with a guy by the name of Deshaun Watson at the helm.

For the first time since December of 2014, when Streeter took over for Chad Morris, the Tigers are in search of a starting quarterback.

Streeter told TigerNet at the Fiesta Bowl that while junior Kelly Bryant will be starter on the first day of spring practice, the competition for the starting job is wide open and everyone is starting with a clean slate.

“All of these guys who are here and coming in are going to have that opportunity when Deshaun leaves. It's a wide open battle,” Streeter told TigerNet. “Kelly will come out as the starter on day one of spring ball. He deserves it. He's done well and he's the best one we've got right now as far as being consistent and learning and understanding everything, but it's going to be an ongoing battle of competition and they're all going to have an opportunity. They all have a good chance, they really do. They all have a chance and they all have an opportunity and that's how we want to create that competition.”

Bryant will be competing with Tucker Israel, Zerrick Cooper and Hunter Johnson for the starting job, a competition Streeter said he can’t wait to see unfold.

“I'm very excited just because there's so much unknown but there's enough known that they're great kids and they're very talented, so it's just an exciting part of the coaching profession where you get to start kind of fresh with some kids and you're just anxious to see how it turns out,” Streeter said. “Like I was telling somebody earlier, we're fortunate because to play quarterback here at Clemson these past couple of years and in the future, you're always going to have a supporting cast around you, so you don't have to be the hero.

“As long as you can make the right decision and get it somewhere in the area, they're going to make plays for you. I think that takes a lot of pressure off the quarterback position here and that helps me become very excited about the future, whereas other places the receivers are leaving and they've got nobody that they feel is any good and now you have to bank on your quarterback being really good and being that Superman and making all of that plays. You don't have to do that here, so it's a great situation.”

When evaluating the quarterbacks currently at Clemson and those he’s recruiting, Streeter looks at their mental abilities more than their physical abilities.

“The number one thing is what type of mind does he have? Can he make decisions? Can he throw the football? By being a quarterback in this offense, you've got to be able to do those things first, and because we have the supporting cast of throwing the ball to receivers and tight ends and running backs, we're able to take some of the pressure off of that quarterback position,” he said. “Just being able to do that stuff is critical and I'm just excited about the future of all of those guys.”

By the end of spring practice and fall camp, Streeter hopes to see one of the signal callers separate themselves.

“It's a matter of the cream rising to the top and the guys that make those plays in crunch time. We're going to try to put them in that environment as much as we can in the spring and give them all plenty of reps and see how they perform under pressure,” he said. “That's the key - under pressure, in duress. The next step for whoever does win the job, can they handle the pressures of being the face of the program and the media and all of that stuff that goes along with it. They haven't had to deal with it yet, but they see Deshaun and how he handles it and that's helped them tremendously, but for them to do it themselves is a whole other thing.”

Below is what Streeter had to say about each of the quarterbacks currently on campus:

"He's definitely improved with his arm and accuracy, consistency and that all stems from more and more reps and experience. Because he's gotten those reps and experience throughout the whole fall, the game has slowed down for him, and he's been able to pick apart defenses more, understand defense more, which allows him to make the right decision, so that's the biggest change and difference that I've seen in Kelly."

"His ceiling is very high. He might have the most talented arm strength I've ever seen as a player. His arm strength is unbelievable. His ability to throw the football down the field and with a lot of velocity has been great. The sky is the limit for him. It's just all a matter of how much he can retain offensively, what he can absorb and then actually go do it in live reps. He's done a great job of mentally preparing. Now it's just a question of how he's going to respond when there's competition and there are live bullets flying. I think his demeanor is very good for that, so I do believe that he's going to thrive."

"Tucker is one of those guys. I'm giving everyone a clean slate. Tucker, early on in his career had a couple of setbacks with injuries and that sort of thing, but he brings an element to the table that he really understands the big picture and is really smart. The big thing for him is to be consistent. The experience factor is a big part of it, too, and just getting more and more reps."

"Absolutely, he can come in and compete. You just put on his highlight tape, and it's spectacular. His arm talent, his athleticism and then his mind and drive of really, really working hard. He's got all of the intangibles that you want."