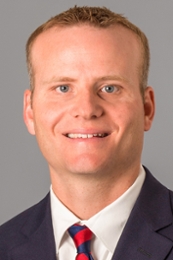 B I O
• Entering 15th full season at Clemson overall in 2022, including his playing career and tenures as a graduate assistant and full-time assistant coach. • Returned to Clemson as the recruiting coordinator and quarterbacks coach in December 2014. He spent 2020-21 as Clemson’s passing game coordinator before being named the team’s offensive coordinator heading into the 2021 Cheez-It Bowl. • In his seven full seasons, he has helped Clemson to six straight ACC titles, six straight CFP berths, four national championship berths and two national titles. • As recruiting coordinator from 2014-19, he spearheaded Clemson’s top-10 classes according to Rivals in five of the six years, including the record No. 2 class for 2020 that also ranked No. 1 according to ESPN. • Helped Trevor Lawrence finish one of the most decorated careers in college football history in 2020, as Lawrence finished second in Heisman Trophy voting and was a finalist for the Maxwell, O’Brien, Manning, Unitas and Walter Camp awards and earned ACC Player of the Year and FWAA All-America honors. • Oversaw Lawrence’s career 34-2 record as a starter, the winningest quarterback in Clemson history and the third-best winning percentage (.944) by a starting quarterback with at least 30 career starts since Division I split in 1978, trailing only Miami’s Ken Dorsey (.950) and USC’s Matt Leinart (.949). • Guided Lawrence as his 164.26 career pass efficiency rating broke Jameis Winston’s ACC career record and helped Lawrence become the first quarterback ever to start three ACC Championship Game victories. Lawrence would go on to become the first No. 1 overall NFL draft pick in Clemson history. • Helped Clemson throw for a school-record 348.5 passing yards per game in 2020, including an individual-record 315.3 by Lawrence and helping true freshman DJ Uiagalelei throw for 439 yards against No. 4 Notre Dame, an Irish opponent record. • In 2019, helped Lawrence extend his streak of consecutive victories to open his career to 25, one shy of the FBS record by a starting quarterback. It was tied for the sixth-longest streak by an FBS starting quarterback at any point of a career. • In 2018, helped Lawrence become the first first-year freshman starting quarterback to win a national title since Oklahoma’s Jamelle Holieway in 1985. Lawrence was a second-team All-ACC honoree and freshman All-American in addition to being a Maxwell Award finalist and Davey O’Brien Award semifinalist. • Helped Lawrence win the Archie Griffin Award in 2018 as the nation’s most valuable player after he set school freshman records in passing yards, passing touchdowns and wins as a starting quarterback. • Coached Manning Award finalist and Davey O’Brien Award semifinalist Kelly Bryant in 2017. Earned Quarterbacks Coach of the Year from 247Sports. • Coached Clemson’s first two-time Heisman Trophy finalist, Deshaun Watson. He became the first player in FBS history with at least 4,000 passing yards and 1,000 rushing yards in a season in 2015. • Watson was a two-time recipient of the Davey O’Brien and Manning awards, given to the nation’s top quarterback. He also won the 2016 Johnny Unitas Golden Arm Award and 2016 Bobby Bowden Award. • Coached the 2015 Tigers to 11 consecutive games with at least 500 yards of total offense, a school record. • Six of the seven teams he worked with as an offensive coordinator between the 2008-14 seasons finished the year in the top 25 of the FCS poll. That included the 2014 Richmond team that entered the FCS playoffs ranked No. 16 in the nation. • Helped the 2014 Richmond team to a 9-5 record and a second-round berth in the FCS playoffs. • Guided Richmond to a top-20 finish in passing offense each season from 2012-14. That included a 314-yard average, eighth-highest in the nation, in 2014. The Spiders averaged 461 yards per game, 19th-most in the nation. • Richmond was seventh in the nation in passing yards (328) in 2013. Virtually every Richmond individual game, season and career school passing record was established during the 2013 season. The 2012 Richmond offense was 20th in passing offense and 21st in scoring offense. The Spider offense saw five players earn All-CAA recognition. • Streeter served as quarterbacks coach at Liberty for six years, the last three as offensive coordinator. In 2011, Liberty led the Big South Conference in passing yards and pass efficiency. • In 2010, Liberty averaged 36.5 points per game, a better mark than in 2009, when the Flames led the nation in scoring offense (36.4). That Liberty team won the Big South Conference title for a fourth straight year. • He served as a graduate assistant at Clemson in 2004 and 2005, when Dabo Swinney was an assistant coach. Streeter worked with quarterback Charlie Whitehurst, Clemson’s career passing yardage leader at the time, during those two seasons. • Three-time letterman at Clemson from 1997-99. He was Clemson’s starting quarterback the last two years. He was also a three-time member of the ACC Academic Honor Roll.