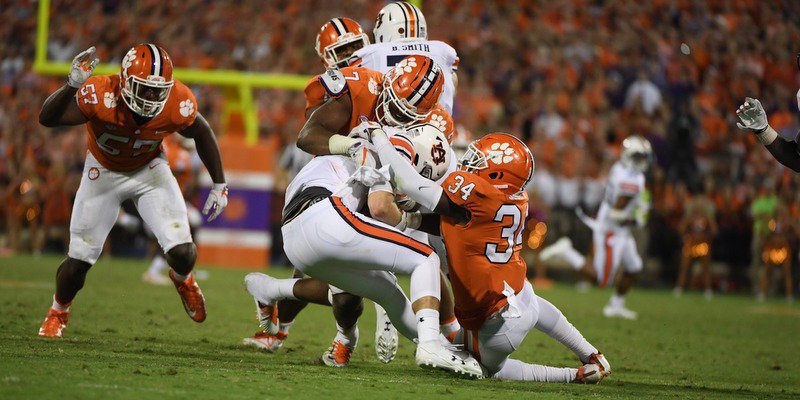 We exited the press box following Clemson’s 14-6 victory over Auburn Saturday night, and that was the one word I kept using when trying to think about what we witnessed as Clemson’s defense slobbered and knocked Auburn’s offense all over the Memorial Stadium turf.

It was a throwback game – two dominant defenses exerting their will for most of the evening. Heck, if that same game had been played between teams wearing Alabama and LSU helmets, pundits all over the country would be pounding their chests about the superior brand of football played Saturday night.

It was one of those games we won’t soon forget, and as good as Clemson’s defensive line played, it was more than just the front four that played well.

Here are some quick thoughts about what we saw:

*Dorian O’Daniel has grown into one of the best linebackers in the ACC. It took time – he played a lot of running back in high school – but he’s matured and turned into a steady playmaker for Brent Venables’ defense.

*Another older player who doesn’t get a lot of attention but is one of the unquestioned leaders of the secondary is defensive back Ryan Carter. Remember when some people would have told you that Carter only had a Clemson offer because the Tigers were trying to land his buddy Robert Nkemdiche. Carter has made a ton of big plays over the last three seasons, and he made his share against Auburn.

That leads me to this observation – you better believe the defensive line played well, but those 11 sacks are just as much of a credit to the secondary and linebackers as they are the line. There were several times that Auburn quarterback Jarrett Stidham had time to throw, but his receivers were covered up down the field.

*Venables is known for his blitz packages, and we saw a ton Saturday. But I also liked the fact that on third down, he would move Christian Wilkins into the middle with Clelin Ferrell and Austin Bryant on either side. He would then flank the ends with Kendall Joseph and Tre Lamar, and a few times Lamar put his hand in the dirt as a de facto fourth lineman. We are likely to see more of the same against Lamar Jackson and Louisville Saturday night.

*K’Von Wallace and Tanner Muse aren’t afraid to hit people. After getting home and watching the game on television, it was evident that both players love to initiate contact, and both were strong in run support. I asked Swinney about Wallace Sunday evening, and he said that while the sophomore made a few mistakes, it was a tremendous effort.

*There were a lot of players who made an impact on defense. Late in the game you saw players like Chad Smith and A.J. Terrell on the field. None of them seemed overwhelmed by the moment.

*Will Spiers’ first two punts weren’t things of beauty, but extended rolls made them decent. Then, on his third punt, he needed a short punt and instead boomed one into the end zone for a touchback. Swinney caught Spiers coming off the field and followed him down the sideline in what we would call a teaching moment.

At the time, I knew that former punter Andy Teasdall was somewhere smiling. To Spiers’ credit, however, he learned from the mistake and came back and pinned Auburn inside their own 20 two times.

*In case you missed it, this Clemson program has gone 39-3 over its last 42 games. That’s an incredible stretch of football. They have also won 33 out of the last 35.

But here’s a statistic we don’t hear much – Clemson is 62-9 since Brent Venables was hired as the defensive coordinator. I know everybody has differing opinions, but to me, there isn’t a better assistant coach in the country. Or perhaps one as valuable. Or both.

*Louisville’s 8 p.m. game against Clemson will be just its second Saturday night home game against a Power 5 opponent since 2000. They hosted Wake Forest in 2016 and won 44-12.

*A lot of fans are concerned about Clemson’s offense, and there is some justification to their worry. However, co-offensive coordinator Jeff Scott and Swinney both admitted that the play calling went ultra-conservative once it became apparent Auburn wouldn’t score.

Of more concern to me was the play at right tackle – both Tremayne Anchrum and Sean Pollard can play better. 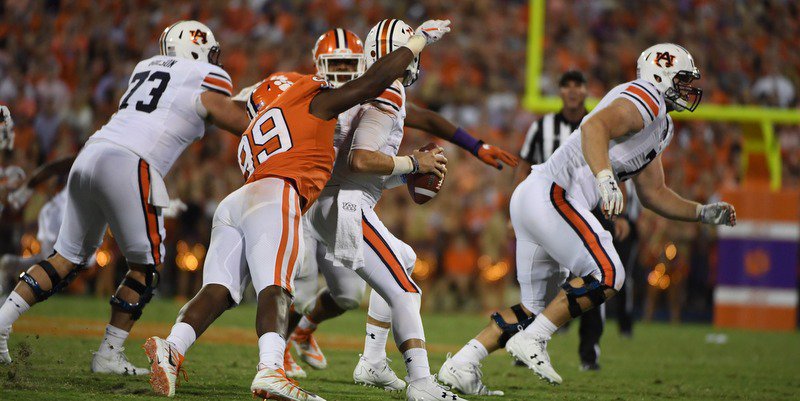 And one final offensive thought – it’s time to let Tavien Feaster loose. He blocked well when he was in the game Saturday, and they will need his big-play threat this season. I know with the coaches that it’s all about trust and that all three guys deserve to play, etc., but it’s time to see what he can do. Give him a game and give him 15 or more carries and see what happens.

*Swinney became Clemson’s career leader in wins over teams ranked in the top 25 of at least one of the major polls with the win over No. 13 Auburn. It was Swinney’s 21st win over a top 25 team. Danny Ford, who will be inducted into the College Football Hall of Fame in December, had 20 between 1978-89.

*Swinney now has 12 non-conference wins over SEC teams since he became Clemson head coach in 2008. That is the most in the nation over the last 10 seasons.